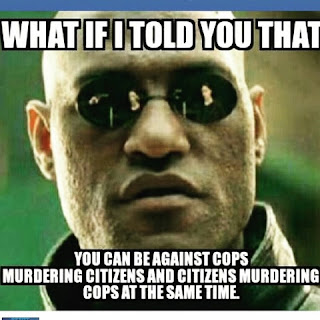 Friday morning as I was getting ready for a cop’s funeral, I saw this meme posted on FB by a high school friend. They probably don’t know the author of this and something just stuck me for a few seconds, then I saw what was staring me in the face. And again, words mean things.

A killing of another human is a homicide, an unnatural death, and can be accidental (e.g. a traffic accident) or deliberate (e.g. murder). Not all deliberate killing is unlawful; killing in self-defense, for example, is not a crime. “Murder” is intentionally or knowingly taking someone’s life without justification. “Execution” is the state taking a life with due process of law. One point I've made in discussing this is when Texas executes someone the death certificate says “Cause of Death: Homicide” and in the remarks section it says “Execution by court order”.

The racial activists (B Hussein Obama, Al Sharpton, Jesse Jackson, Eric Holder) want to equate killing of criminals by police with murder. The lie that Michael Brown was “murdered” helps stir that pot. And no, he was justifiable killed by Officer Darren Wilson. But the fact doesn’t fit the story, or in this case, the meme.
Posted by Mike Thiac at 9:07 AM