Witness to an execution: And now there are three

Texas has a reputation for a very active death chamber, although per capita we’ve come in second to Georgia (if memory serves) for a year. But the thing closest to high speed rail to the death chamber is murdering a cop. In December 2000, seven felons broke out of prison and committed multiple robberies between Houston, San Antonio and Dallas until the night of December 24, 2000.

On the night of Christmas Eve 2000, the Texas 7 murdered Irvine TX Police Officer Aubrey Hawkins while robbing a sporting goods store. The members of the Texas 7 were caught a month later in Colorado Springs CO, where one of the escapees, Larry Harper, cleansed the human gene pool by taking his own life.

The remaining six were tried, convicted and sentenced to death. The man who’s time is up tonight, Donald Newbury, is the third to make it to the execution chamber. He had a unique defense, I didn’t mean to do it.


Newbury contended he didn't shoot to kill Hawkins and pointed his gun far above the officer's head.

Right. Well, the state has eliminated two of the other members of the Texas 7 in the last few years. The leader, George Rivas, met his end in 2012 and George Rodriguez was executed in 2008. Tonight, Newbury is eliminated.

Again the Thin Blue Line organizes the ride to support the family and Irvine Police officers present at Huntsville. Two members of my Blue Knights Club, Texas Seven, meet up with the rest of the members two hours before the scheduled execution. Well, I got off a bit late and made it to Huntsville with just a little time to spare.


As we arrive we link up with Huntsville staff and they thank us for coming.

The officers from the Irvine Police Department who have driven four hours to see this murder put down, move from the prison house and take a position in front of the location. And we wait for a bit, but the word comes quick, “Two minutes!” 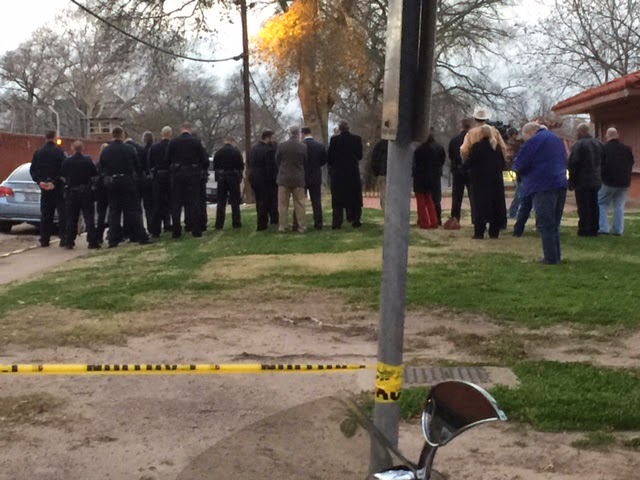 We jump on our bikes and the work comes to make it loud!


We finish up and the word comes down, “Pronounced DOA at 625.” A few minutes later the DA staff comes out and thanks us again for being there. Then a friend of Officer Hawkins comes up and explains we is a witness to the execution. He tells us how Newbury only me this view for a second then turned his head down. He then told us how the he made a rambling statement, taking no responsibility for his actions. Finally, he thanks us because “it took a few seconds and people were asking ‘what is that sound?’, but we and Newberry heard those bikes!” He again thanks us for coming up and asks if anyone is coming to Sturgis this year.

We’re all humbled by the thought this man would thank us as he had to bury a close friend and just saw one of his murderers sent to his Final Judge. We will try and link up at a reception scheduled at the Holiday Inn and say goodbye.

Four down, three to go: Joseph Garcia, Patrick Murphy Jr. and Randy Halprin, sit on Death Row and wait for an order and a date. And we will be there.

Not about to say I will be at all, no one can say for sure that what the future holds. But thanks to the members of the Thin Blue Line and their actions, we will have someone there to support the families, friends and partners of these fallen officers. We have two more cop killers scheduled in the next three months. I’ll be there.

We try and make it to the reception (I really need to get some coffee in me! :<) ) and get lost on the way there. Most of the Thin Blue Line members have gone off to their homes and I need to get going myself. It’s cold (thankfully not as bad as last year with the salt trucks) but it’s time to get going. After an hour of very cold riding I make it home for dinner with the family and some Jack and Cole to take the chill off the night.

Rest In Peace Officer Hawkins. Hopefully this helps your family and friends and you can rest a little easier. Even if there was no one else, the Thin Blue Line and Blue Knights will be there.

God Rest your Soul.
Posted by Mike Thiac at 7:30 PM