In June 2010 (can it be seven years ago!) I posted on my first Active Shooter class, calling it "The best in service class I've ever had." Times flies, so does technology. Now the Houston Police Foundation is trying to bring much more advanced training and facilities to the Houston Police Department, and the greater Houston area.

The foundation reports it is only $2 million shy of the $10 million needed to break ground on the state of-the-art facility.

"We know it's all about training for everything," said Fertitta. "You just realize, this really makes a difference."

To understand what Fertitta wants to bring to Houston, Channel 2 Investigates toured the Fort Worth Police Department's advanced training facility.

"One of the goals of training is to get as close to real as possible while maintaining safety," said Sgt. Eddie Trinidad, with the Fort Worth Police Department.

Fort Worth's tactical village is built inside a 30,000-square-foot facility. The village contains city streets, apartments, houses, a school, a convenience store and a restaurant with a bar. Each building inside the village comes complete with furniture or other items normally seen in a business, home or school. Everyone from cadets to SWAT officers trains on a myriad of scenarios in a near-real-world setting.

"Before, we would have to use a classroom and pretend it was this or that. Well, now we don't have to pretend anymore," said Trinidad.

Trinidad said officers train on everything from routine traffic stops to domestic disturbance calls to active shooter and hostage situations. Fellow officers are brought in to play the parts of suspects. The environment of the village can be altered from night to day, and physical space can be changed to make areas tighter or more expansive, depending on the scenario.

Sound effects can also be piped in to enhance the reality of a situation.

"If we have an officer approaching an apartment door, we can have a woman suddenly scream, or the sound of gunshots," said Trinidad.

Catwalks run over every part of the village so instructors can watch scenarios from above and offer instant critiques.

The Fort Worth Police Department's facility also has a video simulator that gives officers a taste of the life-or-death decisions they have to make on the street.

...The Houston Police Foundation hopes to break ground on the 40,000-square-foot facility sometime next year. The foundation reports it will take a year to build the village, which will be constructed on the grounds of the Houston Police Department's training academy near George Bush Intercontinental Airport.

"I've put in my share. I put in $2.5 million and, gosh, we'd love to raise another couple (of) million dollars from the citizens of Houston," said Fertitta.


Mr. Fertitta, thank you for your contribution, when this comes in it will be a God send for HPD and the other law enforcement agencies in the area. Here is the video of the story, showing how the Fort Worth PD uses its facility:


This is the linked PowerPoint presentation, but the diagram is here: 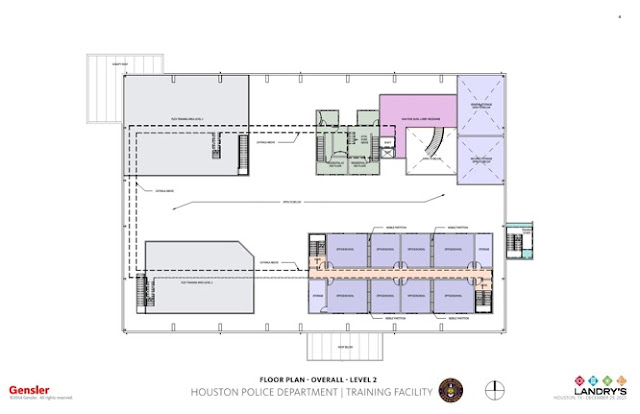 This looks like an incredible training opportunity and hopefully it opens soon.
Posted by Mike Thiac at 11:06 AM