I've often mentioned that my first assignment in the Army was in Korea. I was the Assistant S2 of the 1st Brigade, 2nd Infantry Division, The Iron Brigade. A joke we made was we were "45 from the 38." It would take forty-five seconds for the artillery from North Korea to hit us at Camp Casey.


Their speed and accuracy has likely improved, but we knew our mission in life. We were the trip wire, Pyongyang spills American blood, you will see hell fire (see the Lance missile battalion south of Seoul, removed in the early 2000s.)

Now I found this in Military Times and it's an interesting look at what may happen in the initial phase of Korean War II.

War with North Korea: An inside look at how US troops would respond worldwide

The rogue regime’s missile tests are growing more frequent, and Kim Jong Un is closer than ever to being able to deliver a nuclear-tipped missile to the United States’ West Coast.

"...When asked by reporters about the current tensions with North Korea, Secretary of Defense Jim Mattis said, "If this goes to a military solution, it’s going to be tragic on an unbelievable scale."

Military Times has constructed a detailed picture of what war on the Korean Peninsula might look like, based on numerous interviews with current and former military officials, international experts and intelligence assessments of the North Korean military’s capabilities.

"Anybody that assumes this could be knocked out in 30 days would be dead wrong," said retired Army Lt. Gen. Mark Hertling. "There would be literally thousands, tens of thousands, some say more than 100,000 civilian casualties."

What follows is a matter-of-fact look at the full-blown conventional war that would be unleashed if artillery rounds began to arc over the 38th parallel, ending the tense 64-year-old ceasefire on the peninsula.

U.S. and South Korean forces would respond instantaneously with the help of the American Army, Air Force, Marines and Navy.

The tip of the spear would be the U.S. 8th Army pushing the 2nd Infantry Division — a combined division of American and South Korean troops — into the fight, bringing with it a combat aviation brigade, a field artillery brigade, an armored brigade combat team, and a chemical weapons battalion.

Throngs of U.S. aircraft would streak across the skies over the peninsula in a narrow battlespace, fighting a multi-nation war in an area the size of Minnesota.

Plans call for the South Korean military, with more than 650,000 active personnel and another 3 million in reserve, to do most of the initial fighting.

In the opening hours, U.S. officials alert Marines on Okinawa to begin loading gear onto ships to head toward the fight, while back in the United States the call goes out to the Army’s 82nd Airborne Division to prepare its brigade combat team of paratroopers that’s part of America’s Global Response Force, poised to deploy within hours when needed.

The U.S. Navy would annihilate the North Korean navy, said Jerry Hendrix, a retired Navy captain and analyst with the Center for a New American Security.

"At the outset we will find every North Korean ship at sea and destroy it, or [if] in port, we’ll hit it, probably with Tomahawks," Hendrix said.

North Korea is believed to have dug several tunnels under the Demilitarized Zone, which could allow it to rapidly deploy troops behind the minefields that separate the two Koreas, said Joost Oliemans and Stijn Mitzer, two analysts in the Netherlands who specialize on the North Korean military.

"The first tunnel discovered by the South was estimated to have allowed for the deployment of 20,000 troops per hour," they said...


For decades, a major effort of the US and ROK (Republic of Korea) armies has been to locate and destroy these tunnels. I'll make a safe assumption that we have many either destroyed or set for immediate destruction if things look bad (don't want to tip your hand too quickly.) When I was there many of the roads just south of the DMZ were cut through massive rock, just wide enough for a large truck or tank to pass. These choke holds were set with square blocks elevated to their sides. The blocks were set upon a cut "table," with small windows on the side. Throw one grenade in, the support will collapse and the blocks with fall into the road. Ruins your day if you want to come down the road. 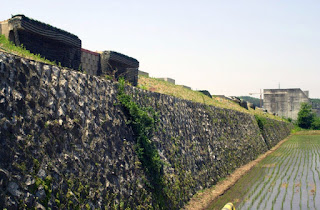 "...A key challenge will be finding the North Korean artillery, which are hidden inside carved-out positions built with rails that allow enemy soldiers to slide the piece out of its hiding place, fire, and then pull it back into the mountainside in minutes.

The jagged mountains and deep valleys make the battlefield terrain a daunting challenge for land warfare.

Hertling recalled a tour he did decades ago on the peninsula, taking helicopter rides to different locations and seeing the land below for the first time.


I'll like to show two pictures. The one on the left contains the Koreans Peninsula in total, showing how rugged the terrain is. On the right, on overview of the major road networks. Notice how they all tie into the capital of Seoul and how close they are to the border. In the opening hours thousands of artillery shells would strike the road networks throughout the Seoul/Incheon area, disrupting evacuations and military operations. Hopefully in the time before actually hostilities, the ROK government would move people out of the major cities. As Military Times points out: 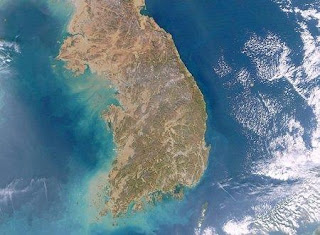 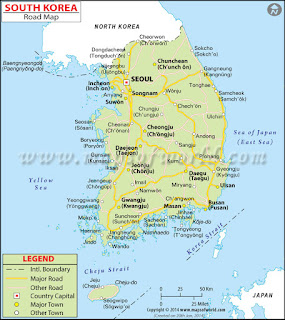 Seoul is about 35 miles from the demilitarized zone separating the two nations, and North Korean rockets and artillery could cause significant damage to the densely-populated area of about 25 million people.

Seoul is nearly twice the size of Baghdad, with significant urban sprawl. The South Korean capital city has skyscrapers such as the 123-story Lotte World Tower, which opened last month and is the fifth tallest building in the world.

North Korea’s Koksan 170 mm self-propelled guns and 240 mm and 300 mm multiple-launch rocket systems could reach Seoul from their positions, according to a May 2016 report by geopolitical analysis firm Stratfor.

Those weapons represent a small part of the North’s artillery, Stratfor said. At best, most guns could hit the northern outskirts of Seoul — and its longer-range guns have greater problems with accuracy.

"If every one of Pyongyang’s 300 mm multiple rocket launcher systems were directed against Seoul, their range would be sufficient to rain fire across the city and beyond," the report said.

A single volley would unleash 350 metric tons of explosives — roughly equivalent to ordnance dropped by 11 B-52 bombers. The world would see civilian casualty numbers equal to the entire Syrian conflict in a matter of days, Hertling said.

That creates a massive humanitarian crisis in which millions of civilians fleeing Seoul southward would clog up rail lines, air traffic and roads just as U.S. and coalition forces were pushing north, he said.

While many analysts agree that the North Koreans would push as fast as possible to gain ground in the South, one fear is the North Korean military getting significant troops into Seoul.

That could spark what Army Chief of Staff Gen. Mark Milley has referred to as the dreaded "megacity combat."

It’s a scenario that the U.S. military has not faced in a long time, if ever.

The Air Force’s ability to provide close-air support and other air power would be exceptionally limited in a megacity fight, Carlisle said.

"If [North Korea] got into some portion of Seoul, that would be incredibly difficult," Carlisle said....


Now this would not be a replay of 1950. The ROK Army is a professional, well trained and equipped force, we've got units and other assets already deployed there, we've spent decades planning for this possibility. That being said, with an army of over one million men and between 12,000 to 14,000 pieces of artillery. Now NOK artillery has serious issues with quality control and reliability, with numbers like that, they will overwhelm many targets in the initial barrage.

In summary, K-Day would be fugly!
Posted by Mike Thiac at 4:59 PM