Anyone who's worked with a police K-9 knows the four legged officers are not animals, they are partners and part of the handler's family. When the dog retires due to old (8-10 years) age or injury, they generally stay with the handler's family. When the handler retires, they often get to pay for their partner and keep him with the family. Unfortunately the sergeant here didn't retire, but at least his partner will take care of the family. 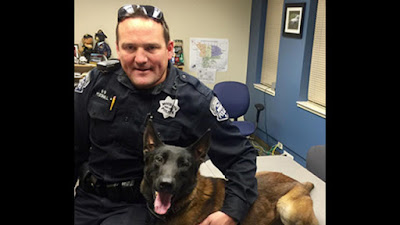 MODESTO, California -- Modesto officials decided Tuesday that Ike -- a 3-year-old police dog -- can retire and live out his days with the family of his former handler, Sgt. Mike Pershall, who was killed in August by a suspected drunken driver.

The City Council voted 7-0 to sell Ike to the Pershall family for $1.

Police Chief Galen Carroll asked the council essentially to give Ike to the Pershall family. He said in an interview last week that this might not be popular with everyone -- Ike is 3 years old and most K9s work until they are 8 or sometimes even 10 -- but it was the right thing to do.

"It is not a good deal for the Police Department to lose the dog," Carroll said last week. "But there is also the human factor of, you have a wife and two kids who just lost their dad, and that's the family dog. What is the right thing to do?"

Ike is a Belgian Malinois and cost the Police Department $9,137.


Good to hear the city did right by one of their cops. Enjoy your retirement Ike.
Posted by Mike Thiac at 2:27 PM

Email ThisBlogThis!Share to TwitterShare to FacebookShare to Pinterest
Labels: K9