Some initials observations on the Las Vegas shooting

Like everyone, I was shocked and horrified by what happened in Las Vegas Sunday. I was proud to see the LV Metro Police quickly react and handle the shooter, and while this event is far from over (it's not even the end of the beginning yet) here is some things we know and some speculation and conclusions. 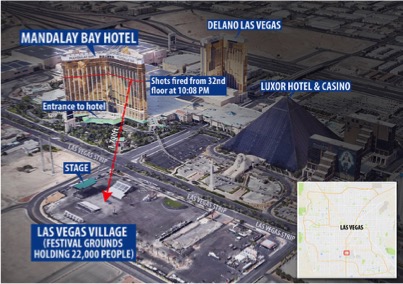 An overview of the hotel and concert area. Notice how the shooter has a perfect over watch of the entire audience location.


Police One had an initial look at the event and they have three point to bring up:

The complex, carefully coordinated attacks of 9/11 have been replaced with a new kind of violence that is significantly harder to detect

...This tragedy reminds us that it’s nearly impossible to prevent lone wolf attacks. The complex, carefully coordinated attacks of 9/11 – and their associated trails of bread crumbs - have been replaced with a new kind of violence that is significantly harder to detect.

Regardless of whether a nexus to terrorism exists, or the gunman simply went off the deep end, we must focus on prevention and encouraging private citizens to be “first reporters” who can improve law enforcement’s ability to identify, investigate and potentially mitigate attacks or plots.

Since the days of the Columbine High School shooting, law enforcement has trained extensively for rapid response to active shooter situations. Yet the idea of a gunman taking aim on a crowd from high ground outside an event’s immediate perimeter reminds us that bad actors are always thinking outside of the box. They keep coming up with new ways to cause mass casualties. That thought should be appropriately haunting to us all.

By all accounts, Las Vegas law enforcement officers did their jobs exceptionally well. They responded quickly, identified the shooter’s location and ran toward the gunfire, as they are trained to do. The Las Vegas Metro PD SWAT team was likely already on site to provide extra security for the music festival; our SWAT team in Dallas was often assigned to similar public events.

No one could have stopped this attack, no matter how good the security design principles were on the ground. Given the range, distance and cell phone video footage that has emerged so far, the shooter had fully automatic weapons and an arsenal of extra magazines. He likely transported the weapons into the hotel in a suitcase or a golf bag, so no one would have been the wiser. Hotel guest screening policies may be in for an overhaul after this tragedy, but screening every piece of luggage is not necessarily practical. Where does it end?

2. If it sounds like gunfire, move or take cover.

What can people on the ground do to save themselves? First, you have to recognize the sound of gunfire. People have described the sound as similar to fireworks, an engine backfire or even a helicopter. Sadly in this day and age, citizens should accept the fact that they may hear gunshots. Assume that’s what the sound is, and move or take cover. Moving targets are harder to hit.

As a SWAT officer, when I set up on a structure, I always had cover and concealment. It’s different when you’re on the beat. During my patrol officer days, if I heard gunfire, I immediately sought cover. Cover is different from concealment; concealment simply hides you, while solid cover provides protection from the bullets. Concrete and steel are good options – think about engine blocks or the concrete jersey barriers that are typically set up for crowd control.

We often find that 99 percent of the time after a shooting occurs, friends or neighbors come forward and say, “I always thought that person seemed strange.”

It remains unknown whether Paddock showed signs of unusual behavior leading up to the shooting, but certain behaviors can serve as indicators to alert family, friends and employers that something is wrong.

The fact that someone is in crisis - such as divorce, financial troubles, or job loss – means nothing in and of itself. However, a crisis taken in the context of factors such as increasing isolation, depression, aggression, abandonment of family and friends, or expressed hatred of an institution or individuals, may serve as a warning sign and require further attention.

Private citizens are law enforcement’s first line of defense in identifying potential threats. We must remain vigilant on educating our communities not only on the important roles they can play, but how they can deliver intelligence information.

This heightened awareness, paired with resources such as the Department of Homeland Security’s If You See Something, Say Something campaign and basic education, could provide the small edge necessary for law enforcement before an individual commits an act of violence. DHS offers a wealth of free printable materials that inform private citizens, businesses, and other organizations of what they can do to keep their communities safe. Make sure your community is informed...

Rich Emberlin is a 30-year law enforcement veteran who served most notably with the Dallas Police Department’s elite units, including Dallas SWAT, the Criminal Intelligence Unit and the Office of the Chief of Police. During his 15 years in SWAT, Rich participated in thousands of missions, including counter-terrorist operations, hostage rescues, barricaded suspect situations, and arrest and search warrant executions. As a detective in the Criminal Intelligence Unit, he was responsible for investigating protest groups and threats against government officials and police officers. Rich retired from the Dallas Police Department in 2016 and remains active in the industry as a law enforcement expert and instructor. He has appeared on shows including A&E Networks’ Live PD and Dallas SWAT, the Outdoor Channel’s Elite Tactical Unit and NRA-TV. Rich continues to serve his community as a reserve deputy for the Tarrant County Sheriff’s Department.

Discussing this with two close friends, MF, a retired Army infantry colonel and ML, a former Marine and current National Guard lieutenant colonel, they gave me some speculation and other conclusions:

1. Knowing how fast an AR-15 platform will heat up and that this man had (at last report) 23 weapons, he likely (speculation here) had several with drum rounds (100 or larger), would fire the first for 30-50 rounds, and go to the next. This allows a weapon to cool and continue a sustained rate of fire.

2. Concert venues will have to take into account possible sniper locations and may need police assistance with another sniper. If there was a sniper (not a patrol officer with an AR-15 but a trained sniper with this 700 Winchester and a spotter) he could have easily taken the shooter out. I was on the security staff at the Super Bowl last February and we had multiple sniper teams for this issue (local, state, federal).

3. Patrol officers need carbines. Easier said than done, if only for legal liability issues, the officers need to go through formal training. In many departments that means a week off, which is manpower off the street. With the number of veterans coming into law enforcement, modified (i.e. shorter) classes may be an option. A 6 year veteran of the Army or Marines will disassemble an AR-15/M4 in seconds and if they are fresh veterans, may remember their battle sight zero. But it's critical for us now.

4. Train patrol on some basic infantry tactics, getting to cover/concealment quick, low or high crawling to get over an area, 3-5 second rushes from cover to cover.

A meme from a few years ago sums up the change in police work over the last few years: 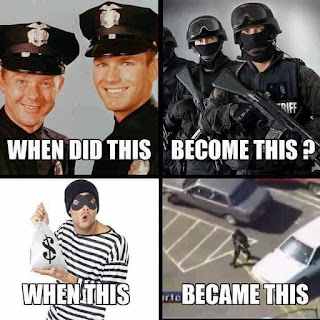 I loved Adam-12, and when he passed last year the LAPD Martin Malloy full department honors. But his suspects did have body armor or AK-47s. Be prepared fellow cops. Every day I walk out to my vehicle with an AR-15 (5 magazines, 147 rounds) and a 870 12 Gauge (15 buckshot, 10 slugs). Better have and not need, than need and not have.

Be safe out there.