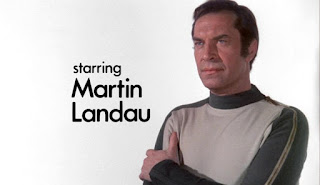 Martin Landau passed this weekend at the age of 89. He became quite an accomplished actor in rolls in Hitchcock's classic North by Northwest, the real Mission Impossible, and the roll that would earn him the Academy Award, as Bela Lugosi in the film Ed Wood in 1994. But to me and countless nerds, he will always be John Koenig, Commander, Moonbase Alpha.

Space 1999 came along in 1975, at the end of the Apollo program and Americans were still optimistic about our space program. In the years of Ford and Carter, we (especially 10 year old idiots from small town Louisiana) saw ourselves colonizing the moon and reaching out to the other planets in my lifetime. Well...that didn't work out.

I still love space opera but my taste have matured. I appreciate plot, character development, etc over special effects. But I didn't appreciate this back in you younger years as I do today, and it's appropriate.

I've often looked over this scene from the first season episode Black Sun. The lunar colony is heading to a black sun and almost all of the crewmen are looking at sure death in a few hours. As Koenig and his long time friend, Professor Victor Bergman (played by British actor Barry Morse) contemplate the end, Bergman brings out "Sixty year old brandy" and pours two glasses. The hardened commander contemplates what to say for a moment, and utters, "To everything that might have been." The more optimistic Bergman thinks for a second and finishes the toast, "To everything that was."

I have to say I've stolen that toast more than once, including the time I was retiring from the Army!    :<).

RIP Martin Landau, a life well lived. It's not how you're buried, it's how you're remembered. And you sir will be remembered well.
Posted by Mike Thiac at 5:45 PM