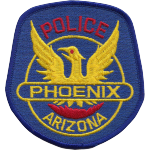 Police Officer Paul Rutherford was struck and killed by a vehicle near the intersection of 75th Avenue and Indian School Road at 8:30 am.

He was at the scene of an earlier accident when a call involving an armed subject was dispatched at a location across the street. He was attempting to cross the street to respond to the call when he was struck by a vehicle. He was transported to a local hospital where he succumbed to his injuries a short time later.

Officer Rutherford was a U.S. Air Force veteran and had served with the Phoenix Police Department for 23 years. He is survived by his wife and two children.