I wonder if Time will have a cover story of these two and a headline "Who needs Washington?"

A few years ago Time, the once great newsweekly (now waste of trees and electrons) had this cover: 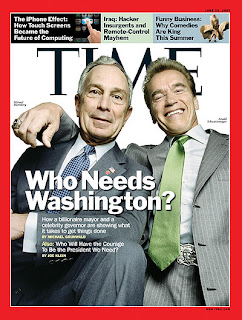 Why you ask. Because the liberal rich guys (Bloomberg always and Arnold after he got his ass kicked in the 05 elections) were going after the real issues...for New York it was transfat and for California it was not massive budget deficits, people fleeing the state but global warming (or was it climate change by 2007...I keep loosing track of the terms).

Now in a time of fiscal crisis some real leaders have come up and shown how to handle overgrown bureaucracies in the states. From Jersey:


“The four-year-old state Division of Minority and Women Business Development has been quietly dismantled by the administration of Gov. Chris Christie, which continues to register small businesses and help them obtain state government contracts on a race- and gender-neutral basis,” according to NJ Biz (subscription required)....

Another example of real leadership in action:


Her office announced late Tuesday that she's removing all members currently serving on the board, which recently approved greenhouse gas cap & trade regulations that would impact power plants and other large polluters across New Mexico.


Martinez's office contends the board moved forward with the regulations after state lawmakers rejected the proposal during the legislative process.


Supporters contend the board went through an exhaustive public process before approving the regulations.


In a statement, Martinez says New Mexico has suffered from anti-business policies and that the EIB made it clear it was more interested in advancing political ideology than implementing commonsense policies.

Now I love the fact the governor is trying to make her state more business friendly. Something California and New York's people have never understood, if you unfriendly to business they will take their businesses with their jobs and tax payments to other places. But more to the point she slapped down a group of arrogant bureaucrats who need to be reminded they are not our rulers. The EIB has no authority except what it is authorized by the people of this state. And I wonder how the hell these bureaucrats get the idea they can just issue regulations without authority from the legislature or executive branches. It is nice to finally see some accountability put onto these people.
Posted by Mike Thiac at 9:38 AM