Memorial Day. Not a day to be celebrated, but remembered. To remember those who died in the line of duty.

All across the country, volunteers will put up flags, place flowers on stone markers, visit family or friends.

Even as you have your BBQ over the long weekend, if you can't any event or memorial, remember the men and women who made all of this possible. President Lincoln said it better than any man in history:

But, in a larger sense, we can not dedicate-we can not consecrate-we can not hallow-this ground. The brave men, living and dead, who struggled here, have consecrated it, far above our poor power to add or detract. The world will little note, nor long remember what we say here, but it can never forget what they did here. It is for us the living, rather, to be dedicated here to the unfinished work which they who fought here have thus far so nobly advanced. It is rather for us to be here dedicated to the great task remaining before us-that from these honored dead we take increased devotion to that cause for which they gave the last full measure of devotion-that we here highly resolve that these dead shall not have died in vain-that this nation, under God, shall have a new birth of freedom-and that government of the people, by the people, for the people shall not perish from the earth.

Posted by Mike Thiac at 6:00 PM No comments:

This past Tuesday, had two anniversaries. My nephews birthday, and the anniversary of my brother's passing.

I heard this song Tuesday, and it's been in my head since. Bobby loved Led Zeppelin, and another nephew played this at his funeral.

I heard the Heart cover of this classic when Zeppelin was honored by the Kennedy Center. Gotta say it's awesome, but nothing beats the original .

We miss you Bobby. Wish you were here today, your Godson's oldest is escaping high school, and heading to LSU.

Be seeing you man! 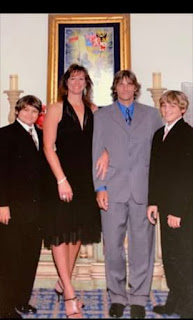 Posted by Mike Thiac at 6:00 PM No comments:

I hate it when lawyers try to tell me the law...

And yes, I'm being somewhat facetious.

Multiple times over the years I've had a lawyer try to impress me, or push me, or tell me that he knows the law and I don't. With all due respect of their J.D. degrees, they generally don't know that the hell they are talking about.

Most lawyers I've met over the years do not practice "the law," but are engaged in a form of civil practice. The sue insurance companies for people in accidents. They handle contracts for firms. They review real estate dealings for land companies. By "1he law," I mean criminal law, i.e. prosecution or defense. Most attorneys do not involve themselves with criminal law, there is no money in it, unless you are really good defense attorney (See F Lee Bailey, Johnny Cochran, etc.). And some state attorney's general/district attorney's can get some leads that can make them cash, but the money is generally civil.

One time I was running radar, stopped an attorney for going over 35 in a 20 mile per hour school zone. I know he is an attorney because he mentions it five times before I can identify myself (Slight exaggeration).

After he said he was a lawyer, I asked, "Really, what kind?" He barked, "Doesn't matter!" I knew he wasn't a defense attorney because he was that stupid. And if he was a prosecutor, he would have shown his ID by now.

The man was upset he was being stopped for something as unimportant as going almost twice the legal limit in a school zone. He was too essential for this minor issue. After I handed him the ticket, he tried to spook me.

"I'll see you in court! How does Christmas day sound?"

I laughed in his face and he said, "What?"

I smiled and explained "the law" to this judicial genius, "Sir, there is only one court open on Christmas day in this county, it's the district arraignment court on Franklin Street. It doesn't handle municipal cases.”

Another (More serious) case was of a 17-year-old at home alone (Parents out of town), where one of his friends shot himself. After calling 911, he called his brother, and the brother immediacy called the "family attorney." We are going through the investigation, and the lawyer shows up, demanding to see the young man. We explain to him he hasn't requested counsel . He again demands to see the 17-year-old, and one of the other officers ask, "Excuse me sir, are you a criminal defense attorney?" He answers he in a real estate attorney, and the investigator explains, "Sir, he's an adult at 17, and right now he is not a suspect, but a witness. If he wants a lawyer, he must request that himself."

And last week was a good one. I get called by a man, his wife had a disturbance with a workman at a neighbor's house. I start my interview, and first got him to stop telling me his life's history (“We've lived here for over 20 years…,” etc.), and to focus on the matter at hand. He stated a vehicle was blocking is driveway, and when his wife asked him to move his car, he got into her face.

I asked if he struck her, or threatened her, he said "No, but he poked into her face at a close distance...and that's battery...I'm attorney." I blurted out, "I love it when lawyers tell me the law..." and asked him what type. He responded labor law. I explained to him the Texas penal code has Assault by Threat and Assault by Contact, but you will not find the word “battery” anywhere in the code. Managed to get the matter settled, and hopefully it doesn't blow up again.

Then again, much worse than lawyers, law school students. At least a lawyer has a degree, the law students have...the constitutional law class they took last semester taught by an idiot who has not stepped into a courtroom since his last traffic ticket. Example, fight at a bar, after we get everyone into custody, I'm assisting the primary unit by running some IDs. I placed a jacket of one of the suspects on the hood of my car while I was searching him. As I'm running the IDs, another man, having nothing to do with this incident, walks up, grabs the jacket and starts walking off. Needless to say we hooked him up, got him cuffed up, placed him in the back of my car. As I was running his ID, he actually asked, "What is your probable cause to stop me?"

I looked back slowly, I didn't know with contempt or amusement, and asked him, "What year of law school are you in?" I was asking the question as a contemptuous joke.

He looked a bit surprised by my question, but answered, "Second."

I smiled back at him, "I don't need probable cause to detain you, just reasonable suspicion. And this may shock you, but taking another person's property is called theft, and that is a crime." The future supreme court justice seemed shocked.

I'm actually not hostile to attorneys, and I'm like most people. I make jokes about lawyers, until I need one. I recall a very strange incident during the George Floyd riots in Houston, when we almost had a situation blow up. We had two young women (Got the impression of college students) egging on the protestors blocking the street. And another man walked up to them, started to talk to them, and managed to calm everyone down. He turned around, and I could see the sign on his front. "ACLU Attorney."

I went up, thanked him for his help in preventing a riot, and finished it with, "I never thought I would be thanking an ACLU lawyer in my life..." He smiled and walked off.

Who knows, maybe the Bard was a bit off with one of his most famous quotes, “The first thing we do, let’s kill all the lawyers”

Posted by Mike Thiac at 2:07 PM No comments: