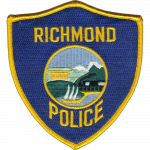 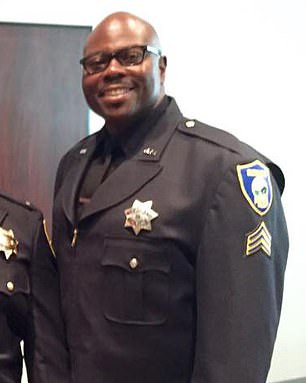 Sergeant Virgil Thomas died after contracting COVID-19 during a call for service.

Rest in Peace Bro…We Got The Watch Nemo me impune lacessit Day is done, Gone the sun, From the lake, From the hills, From the sky. All is well, Safely rest, God is nigh.
Posted by Mike Thiac at 11:00 AM No comments:

In English, Always Look on the Bright Side of Life, a classic from Monty Python and the Holy Grail.

Yesterday I posted on the need for South Korea to arm itself with nuclear weapons to defend itself from the Kims up north. But I found this and had to share.

So your country is a 5th world s^&*hole, you've got more people in prison labor than with proper nutrition, George Orwell likely looks upon you as going a bit too far, even for Oceania, Eurasia, and Eastasia. You still gotta laugh sometime.

So does Japan and Australia, but that's another post for another day.

I've been fascinated by the Korean Peninsula since I was posted with the 2nd Infantry Division in 1988. Since I really was fascinated with looking into the country when I was stationed on the border in the summer of 1989. And no, Mrs. Clinton, the borders are not a few miles from each other, but right next to each other. 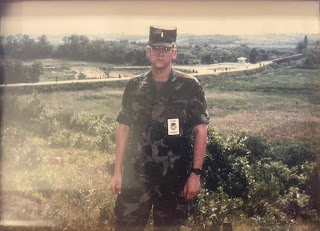 The author, summer, 1989. Yes, that is North Korea in the background.

I've read up on North Korea since I've left. I was very concerned when the founder, Kim Il-sung passed. While he was a ruthless tyrant, he was not insane. He was scared off by the threat from Ike that he would use nukes to end the war in 1953. Fortunately, his son, Kim Jong-il, and grandson, Kim Jong-un, have not pushed the button, if you will.

However, there is one items the Kims are focused on. Regime survival. They don't care if their nation is less developed than Lower Slovia, they will keep their armed forces strong enough to threaten any perceived threat. With a million man plus army, plus and enlarged (If somewhat antiquated) air force, and improving navy, North Korea has the capability to resist its close neighbors. However, they have a very large hold card, a credible nuclear threat.

The author here brings up the likely result of the hostile regime. While she seems to be opposed to an "arms race" on the peninsula, personally I am not. There is no question the nuclear deterrent has kept the North Koreans on their side of the border for over 70 years, and still does. When I was stationed in South Korea, there was a Lance missile battalion just south of Seoul, with a "special weapons" company attached. We knew it carried the nuclear warheads for the Lances, and likely other tube artillery. The Lance went out of the inventory in the 1990s, but an open secret is there has been a submarine off the coast since then. And Pyongyang knows it.

Are people who think like this warmongers? Not at all. We simply know talk and nothing to back it up with are worthless. So we will remember the wisdom of Ronald Reagan, "Peace Through Strength."

With that as a introduction, some highlight of an excellent article.

Double Asymmetry: The Inevitability of an Arms Race on the Korean Peninsula

On June 6, South Korea and the United States test-fired eight ballistic missiles, a day after North Korea test-fired eight of its own ballistic missiles, offering a snapshot of an arms race that has been going on for some time. Since 2019, North Korea has resumed testing its missiles, including intercontinental ballistic missiles it tested earlier this year, lifting its 2017 self-imposed moratorium on nuclear weapons and missile tests. Just during the first half of 2022, it has test-fired over 30 missiles, breaking its 2019 record of 25. A seventh nuclear test seems imminent judging from recent activities at North Korea’s Punggye-ri nuclear testing site. After Kim Jong Un defended his acceleration of the arms buildup at a meeting of the Central Committee of the Workers’ Party of Korea last week, North Korea’s provocations will likely continue. South Korea, for its part, is also accelerating its military buildup, seeking more sophisticated ballistic missiles, including submarine-launched ballistic missiles and hypersonic cruise missiles, as well as missile defense systems. The country’s new president, Yoon Suk-yeol, has vowed to construct a powerful military.

And they will continue to. Hopefully this will lead to Japan and other Southeast Pacific nations to move into this direction. North Korea will not be deterred by words. Neither will China.

The North’s March Toward a Survivable Nuclear Arsenal

North Korea is advancing its nuclear and missile capabilities to deter the United States. It is believed that North Korea has not yet acquired the ability to launch a nuclear attack against the United States in light of North Korea’s 2017 ICBM test that failed on the reentry phase. The re-entry vehicle technology protects a nuclear warhead from the intense heat and vibrations generated when a long-range missile re-enters the Earth’s atmosphere. One of the three missiles North Korea launched on May 25 seems to have been aimed at testing its re-entry vehicle technology (this missile had a flight path described as a “double arc” with the missile ascending and descending twice, which may indicate a re-entry vehicle breaking off from the missile.) In addition, North Korea needs to enhance its second-strike capability: the ability to retaliate with nuclear weapons against a nuclear attack. Its recent test of the Hwasong 17 missile may be aimed at filling this gap. Much attention has been paid to the size of the Hwasong 17 — it is the largest ICBM ever developed (hence the name, “monster missile”). The size matters because the missile can carry a large payload, potentially including multiple re-entry vehicles, which complicates a missile-defense system’s job of shooting down all of them at once. The fact that the missile was tested from a mobile launcher makes it even more difficult for missile-defense systems to target. North Korea’s recent testing of a submarine-launched ballistic missile and hypersonic glide vehicles could also pose threats to missile-defense systems. All of these are aimed at enhancing North Korea’s second-strike capability...

And make our deterrent less relevant. But there is another major issue, if/when South Korea begins to develop its own nuclear forces, it will have serious push back from the Democratic party in the US, not to mention it's own left of center politicians. And it's safe to say the Chinese will not be happy.

Due to this uncertainty, South Korea is looking at ways to develop its own capability to counter North Korea’s nuclear threats. The most effective way to balance nuclear capabilities would of course be to develop its own such weapons. According to a recent Chicago Council survey that my colleagues and I conducted, 71 percent of South Koreans supported nuclear armament. The public overwhelmingly preferred an independent arsenal (67 percent) over hosting a deployment of U.S. nuclear weapons (9 percent). The South Korean public’s support for nuclear weapons, especially their indigenous development, is robust...

I remember seeing rent a mobs in Seoul back in 88/89. Similar to the "no-nukes" protesters in Germany in the early 1980s. I'm sure they will be funded to keep an appearance of notable resistance to the development of an offensive nuclear force. And there will be a large significant portion of the Korean population that does not want open nuclear weapons on their soil. But when you're facing a threat with demonstrated nuclear capability, and the possibility of other nuclear forces (China) backing it up, something must be done to counteract the menace from the north. And, the fact the United States word is not taken at face value by many of our adversaries.

Something Sleazy Joe Biden forgot, it is better your allies respect you rather than like you. And it's critical your enemies fear you more than they respect you.

Seoul, openly work on your nuclear deterrence. It's needed.

Posted by Mike Thiac at 3:54 PM No comments:

In the spring or summer of 1999, I was driving from (i.e. running as fast as I could) from Fort Bliss TX. In the middle of nowhere Texas, I was pushing the scan button on my radio. This was before I had a CD player in my truck, there was nothing called MP3, and I was tired of the tapes I had (Yes, I'm that old).
As I was running from Operation Roving Sands at Fort Bliss, I hit on an interview with an author, Lieutenant Colonel Dave Grossman. He was at the time an active duty army psychologist, since retired. This was soon after the Columbine school shooting, and Dr. Grossman had written On Killing: The Psychological Cost of Learning to Kill in War and Society. This is a classic reference on the the psychological component of killing her human beings.
Fascinating interview, and as soon as I got home, I picked up a copy of the book and read it. And it gives great insight on how someone has to be desensitized to killing to kill. The military and law enforcement use it, but with restraint and regulations. Video games do the same, but without the oversight.
Anyway, I finally got off my ass, and sent the book in for signature. Yesterday it came in and with a quick note. And yes, those two books are in my Amazon basket.
Have a great weekend! 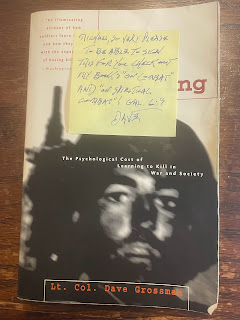 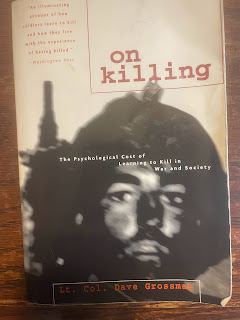 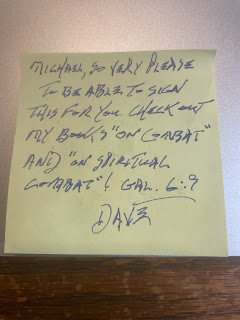 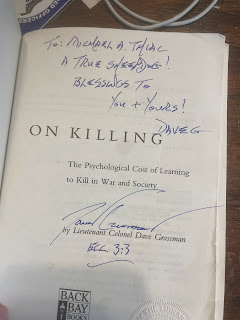