For Meatloaf it's all about the show....

For the second time in two weeks I've gone to great concert at the Houston House of Blues. Meatloaf, with an opening act of Pearl, a heavy metal bank headed by his stepdaughter Pearl Aday.


Meatloaf is a consummate entertainers. Two weeks ago I saw Pat Benatar and for her it's pure music. Meatloaf has the music and interacts with the crowd much more. He was in the middle of the ending of "You took the words out of my mouth" when he stopped and looked up at the balcony (FYI, balcony has seats, floor is standing only) and screamed.

You on the balcony, I'm sixty three years old...if I can stand in front of all of you for over two house your Mother F#$%ing asses can get up now!..."

That was one of the sobering and funny things of the concert. Looking around I would say about one fifth of the crowd was 30 or less. Most of the group had many a gray hair and middle age spread. I was watching 60 somethings shaking it down like they did in their earlier life...and I have no doubt they are paying for it today. My ears are still ringing from the amps...but man, it was worth it.


There are several acts I want to see and I'm glad to see they are on the small venue circuit. You can actually see the members of the band, there is great interaction between them and the crowd. And I can afford the tickets now but not the food and drink....hell, I need to refinance the house for a beer...12 bucks for 20 ounces....will you at least kiss me first!

Nothing beats a great music and great entertainment.....hope Rush is as good next month! 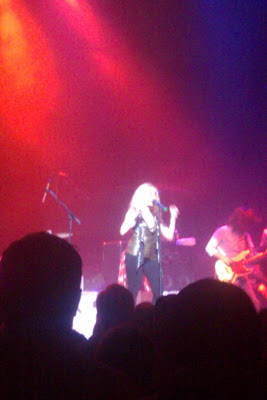 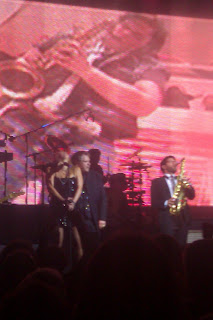 Bless My Soul from The Rocky Horror Picture Show 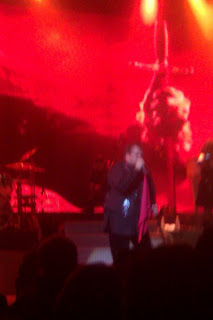 I simply need a better camera...this cell phone crap just don't cut it.  As I recall this was Two Out of Three Ain't Bad.  He gave us a story about how he met a couple who said they had this as their first song at their wedding reception...and I thought I was warped!
Posted by Mike Thiac at 3:02 PM