Yesterday, August 9, 2016, was the second anniversary of the justified shooting of the robber-thug Michael Brown by Officer Darren Wilson. Well, we all know what happened after that. But here is the real fun. A "protest" (funny how all these guys can "organize" their communities to protest, but they can't organize their communities to clean them up, tutor their kids, etc) over the shooting. By people who, if Brown was shot down in the middle of the street, by another black thug, would have never seen anything. And it's fun to see what happens.

Yo, moron, just a suggestion. If you don't want to be hit by a car, stay out of the middle of the street. Also, notice, after the man was hit with the car, the area was shot up.

And these punks will call the FPD to handle this case. After the last two years, I would just answer the 911 call, "Call a crackhead!"

There is a memorial for the Gentle Giant: 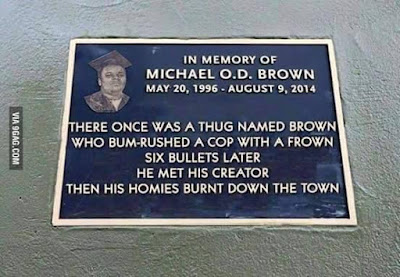