Many cliche's, accepted as fact, permeate the national discussion right now. The usual suspects in the "global warming" crowd scream we must control CO2 emissions, as they are poisoning the planet. When you point out that without CO2, plants would quickly die, and mammals (e.g. humans) would soon follow, they are incredulous. The scientific fact of the Oxygen Cycle seems to escape them.

Now we have this, comes back up every few years. The Mexican gangs are murdering countless people south of the border, and it's the fault of American gun makers. From the LA Times:

The sun had not yet risen when dozens of gunmen stormed into the town of Ocotito in southern Mexico and started shooting.

Salvador Alanis Trujillo tried to fight back, but his shotgun was no match for their assault rifles. So he and his family fled.

This rugged stretch of Guerrero state had always been a little lawless, home to cattle rustlers and highway bandits. But by the time the gunmen seized Ocotito in 2013, the region was overrun with dozens of criminal groups battling for territory.

There was another key difference: The criminals were now packing AR-15s, AK-47s and other weapons of war.

Mexico is in the grips of a deadly arms race.

It began as part of an escalating conflict among major criminal groups, and it accelerated in 2006 after Mexico’s military went to battle with the cartels.

Today, millions of weapons are in private hands — in direct violation of Mexico’s strict gun laws.

Some of those firearms once belonged to the military or police and were sold into the underworld. But the vast majority were smuggled from the world’s largest gun market: the United States.

The arms buildup has helped fuel record levels of violence. Last year, Mexico saw 20,005 gun homicides — nearly seven times as many as in 2003.

Impunity in Mexico, where 95% of killings go unpunished, has spurred more people to take up arms — and carry out their own justice.

After Alanis was forced to abandon his property, which he had bought with savings from a stint as an auto mechanic in North Carolina, he went to state authorities for help.

When none arrived, he and others who had been displaced formed what they describe as a community police force — and began acquiring the most powerful guns available on the black market.

The group’s aim is to eventually take back Ocotito, a town of 6,000 at the base of a verdant mountain range, using an arsenal that includes dozens of machine guns.

In the meantime, Alanis and his group — the United Front of Community Police of the State of Guerrero — have been steadily taking territory.

They say they are cleansing the countryside of predatory gangs, a mission that they acknowledge sometimes employs the same brutal tactics of their enemies.

Salvador Alanis Trujillo, founder of the United Front of Community Police of the State of Guerrero, a vigilante group

They have incurred, and inflicted, many losses in a conflict that Alanis said can only be described as a “civil war.”

“The assassins that kill us are Mexican,” said Alanis, 40. “And the people we shoot are Mexican.”

As for the weapons, that’s another story. He pointed to the words stamped on the barrel of a Colt Match Target assault rifle slung across the chest of a teenage fighter: “HARTFORD, CONN, U.S.A.”

No question, you kill each other. I might remind you if the guns were not available, there are knives, rocks, etc to use. Ever since Cain and Able, man has killed man. But this is an excuse for the murders south of the border.

I've been a subscriber to STRATFOR.COM for over twenty years, and a few years back they had a great point on this belief that America is shipping 90% of all weapons used in Mexican wars. To borrow a phrase, everything is accurate. But none of it is true.

In addition to watching tactical developments of the cartel wars on the ground and studying the dynamics of the conflict among the various warring factions, we have also been paying close attention to the ways that both the Mexican and U.S. governments have reacted to these developments. Perhaps one of the most interesting aspects to watch has been the way in which the Mexican government has tried to deflect responsibility for the cartel wars away from itself and onto the United States. According to the Mexican government, the cartel wars are not a result of corruption in Mexico or of economic and societal dynamics that leave many Mexicans marginalized and desperate to find a way to make a living. Instead, the cartel wars are due to the insatiable American appetite for narcotics and the endless stream of guns that flows from the United States into Mexico and that results in Mexican violence.

Interestingly, the part of this argument pertaining to guns has been adopted by many politicians and government officials in the United States in recent years. It has now become quite common to hear U.S. officials confidently assert that 90 percent of the weapons used by the Mexican drug cartels come from the United States. However, a close examination of the dynamics of the cartel wars in Mexico — and of how the oft-echoed 90 percent number was reached — clearly demonstrates that the number is more political rhetoric than empirical fact.

As we discussed in a previous analysis, the 90 percent number was derived from a June 2009 U.S. Government Accountability Office (GAO) report to Congress on U.S. efforts to combat arms trafficking to Mexico (see external link). 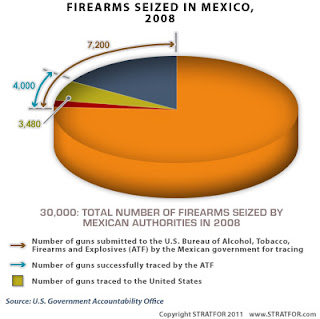 Not about to claim there are no firearms of American origin in the hands of Mexican gangs right now. God knows our border is wide open. But it's not the wild number of 90%. It's often easier to buy the weapons on the black market, and ship them in from overseas. Not to mention if it's stolen from an American owner, it's not the fault of the American manufacturer, or the person it was stolen from.

The LA Times does not show itself well when it's "journalism" is less than what is expected of a high school paper. Hopefully the gangs in Mexico will be controlled at some point in the future. However, this falsehood doesn't help in any way.