OK. a Christian church is lying about the birth of Christ... 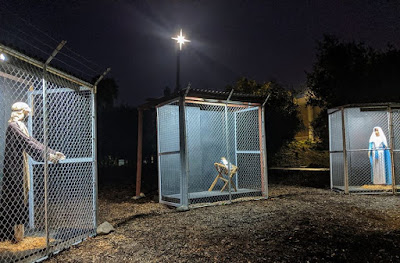 Again, the People's Democratic Republic of Kalifornia comes through. Whenever you think they have hit rock bottom, someone takes out a pick ax, or a jackhammer (coal powered, of course) and goes deeper.


At the Claremont United Methodist Church, a "nativity" scene. I amazes me that anyone with a basic knowledge of the Bible knows Mary and Joseph did not invade another nation, they were in Bethlehem to participate in a census and pay their taxes. But never let realty get in the way of political correctness. And where is Americans United for Separation of Church and State on this? Isn't a "church" getting involved in a political issue here?

BTY libtards, it was B Hussein Obama who put the illegal aliens into cages.
Posted by Mike Thiac at 8:01 AM