Reaching out to to least of God's children to the end.... 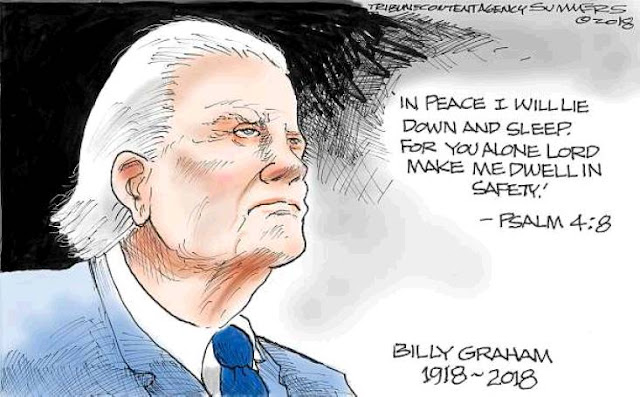 I never met the Reverend Billy Graham in my life, and I do regret that. I missed an opportunity for mass with Pope John Paul II in 1987, again, something I do regret. But Graham, like John Paul II, to the end, was preaching the all of God's children, great, and not so great. Reverend Graham had no issue with going into the prisons and spreading the Word of God to the men and women who needed it most.

As his funeral approaches this Friday, I found this article interesting. His (and his late wife's) casket was assembled by the prisoners of Angola State Prison, Angola LA. From Channel 9 in Baton Rouge.

ANGOLA, LA (WAFB) -
Inmates at one of the country's most well-known prisons will have a hand in laying Reverend Billy Graham to rest. At his request, Angola inmates built his casket back in 2006.

Louisiana State Penitentiary is known as the "Alcatraz of the south." It’s home to the state's most notorious criminals, but is also home to a renowned prison ministry.

“I feel there is a great outpouring of the holy spirit behind bars at this time,” said Clifford Bowman.

Bowman is in bible college at Angola. He was selected to be part of a special team on a special mission: to build a casket. It’s a regular casket for a not so regular man: evangelist, Billy Graham.

“We of course prayed before we started and that's something that does not happen every day when they are doing it in the regular work. Where God is working the devil's gonna’ be there working, so he's gonna’ try and get his licks in, too,” said Bowman.

“This was a great honor. Because this is a great man of God and he wants him an inmate to build his coffin and get the inmate preachers involved and it's mind-boggling. It sends a great message,” said Burl Cain.

Richard Liggett constructed the casket for Graham with a couple of modifications from his usual work.

“I respect the man. I've listened to him. I know what he preaches. You know, but other than that, I just wanted to do the best job I could,” said Liggett...

...“It’s so symbolic, even though the prisoners have committed horrible crimes... God loves them, too,” said Cain.


And so did the Reverend Graham. Thank you Mr. Cain, and the rest of you for preparing this great casket: 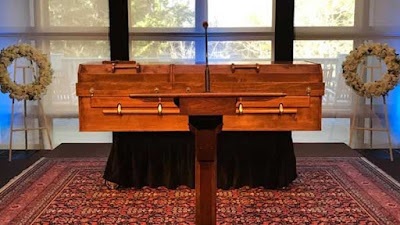 Rest In Peach Reverend Billy Graham. You received The Calling at age 14, and spent a lifetime spreading His Word. Now He will receive you in His Glory.
Posted by Mike Thiac at 7:41 PM