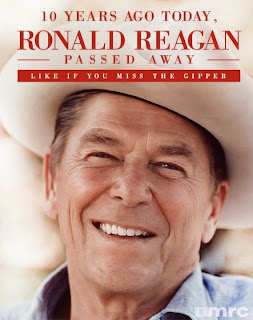 This was on a Saturday morning and when I was driving in to work, I listened to the radio news. The announcer said President Reagan was not doing well and his family had assembled at his home.

I started my shift just after 200 and as I normally did, I put the Cigar Dave. He mentioned how President Reagan wasn't doing well and he wished him the best. Dave went on to mention how Reagan was the first man he voted for in a presidential election. Same here, I voted in 1984. Proudest vote I cast in my life.

Well, I get my first call, an accident on US 59 and I'm still listening to Dave talk about cigars, etc as I'm driving in. I arrive, have to get out of the car to handle the accident and then needed something. I got back into my car and instead of Cigar Dave, I'm listening to Dan Rather. It was at that moment I knew he was gone. And for the first of many times that week, I unashamedly wept.

The next days in the week the world seems to stop. I recall the words of then National Security Advisor Colin Powell to the outgoing President Reagan on his last day in office, January 20, 1989. "Mr. President, the world is quiet today."

Many words were said about the man that week, good, bad, in between. I recall how he was asked about how history would judge him and he said he was't worried, the truth would come out in the end and he would be judged fairly.

Anyone who knows me knows I'm a daily reader of STRATFOR.COM and as an intel geek, this was the best commentary on the man.

Ronald Reagan’s body arrived in Washington today. The “Geopolitical Diary” would not be complete if it did not note his passing. The very least that can be said is that he presided over the United States while the Soviet empire imploded. The very most that can be said is that his policies caused the Soviet Union to collapse. The truth probably rests between those two poles.

Geopolitical events, like great economic processes, are never in the control of one man, and rarely are the result of conscious policies. People argue that the Soviet Union was driven to ruin by the American arms race and that Reagan knew this would happen. The fact is the Soviet Union was moving toward ruin because of an unsustainable social system and because of serious geographical problems. Its agriculture and its rivers never matched up. Moreover, it is not clear that the arms buildup — which was begun by Jimmy Carter, not Reagan — was intended to undermine the Soviets. It was meant simply to counter the Soviets. The idea that it was intended to cripple the Soviet Union was introduced after the fact.

We can debate Reagan’s role in the fall of the Soviet Union forever. What cannot be disputed is this: He believed the Soviet Union was going to collapse, and he believed it would happen within his lifetime. He believed this at a time when almost no one else believed it. He was ridiculed for his simplistic thinking, silly generalizations and lack of sophistication by serious thinkers and policy makers all over the world. But the fact is that the cowboy was absolutely right in his reading of history — and the world-renowned scholars were wrong. We know of no major Soviet expert in or out of government who was prepared to argue in 1980 that the Soviet Union would not survive the century. Reagan did argue that. He was laughed at. He was right.

In order to study geopolitics, scholarship is useful — but imagination is essential. When we think back over the 20th century, it is extraordinary how radically the world changed every 20 years or so. Think of the difference between 1900, 1920, 1940, 1960, 1980 and 2000. Hardly any sober scholar at any of these points could have imagined the nature of the world 20 years hence. Scholars tend to think in linear terms — 2020 will be like 2000, only more so. In fact, if history holds true, 2020 will be extraordinarily different from what any of us imagine now. The modern world, on this level, is a world of discontinuities.

It is difficult to see the forest when you are counting trees, and scholars and experts are disciplined in tree counting. Reagan was not. He called himself a “big picture man” and was ridiculed for it, with people claiming he was out of touch with reality. Perhaps, but the empirical fact is this: He was right when all of the people who saw themselves as intimately in touch with reality were wrong. The scholars and specialists were arguing that the United States must reach a broad détente with the Soviet Union because, like it or not, we shared a small planet. Reagan said living with the “evil empire” was unnecessary because it was going to collapse.

In our business, there is one measure of success: being right. Reagan was right on the most important issue of the second half of the 20th century. Some might say he just got lucky, but, frankly, we don’t buy that. He was right because he reduced the problem to its essence. He looked at the Soviet Union as a poorly functioning empire and argued that the Soviet system was going to lose control of that empire. His argument was simple, but it was not simplistic. That is what his critics always missed: Geopolitical analysis must be simple; it must identify the essential force and ignore the secondary and tertiary forces. The underlying engine of a historical epoch must be identified. Specialists create models that include too many variables — and come up with the answer that the situation is too complicated to predict what will happen, and will probably never change. Reagan reduced the problem to its essence and correctly identified the trajectory.

We tend to confuse the terms “intellectual” and “intelligent.” An intellectual is a person who makes his living dealing in ideas. He is learned by profession. He could also be a moron. There is no guarantee that an intellectual is intelligent. At the same time, there are people who are enormously intelligent, but not at all intellectual. They do not make their living working with ideas. They are not learned. But their unencumbered intelligence can sometimes see the future more clearly than someone who is encumbered by complex ideas that their intelligence can’t sort through.

Reagan was no intellectual. That allowed him to see things that intellectuals could not see. He was ridiculed savagely in his time. He was called a cowboy, ready to involve the United States in dangerous, even nuclear wars. He was accused of ignoring the sophisticated advice of European allies. He was accused of using simplistic moralizing and silly analogies to analyze the Cold War. There was little he was not accused of. But in the end he was right about the course history would take — and his critics were wrong.

In the intelligence racket, the pay is low, the hours long and respect hard to find. There is one compensatory pleasure: the ability to say, on occasion, “I told you so.” As Reagan is buried, let us all pause and say on his behalf to the Council on Foreign Relations, retired European diplomats and the entire faculty of Harvard University: “He told you so.”


RIP Mr. President. God knows we could use you now.
Posted by Mike Thiac at 4:16 PM