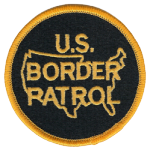 Border Patrol Agent Alexander Giannini was killed in an automobile accident on I-10, near Sybil Road, near Benson, Arizona, shortly after 7:30 am.

Agent Giannini and another agent were traveling eastbound on I-10 when their vehicle was involved in a collision. Agent Giannini was flown to University Medical Center in Tucson, where he succumbed to his injuries.

Agent Giannini had served with the United States Border Patrol for five years and was assigned to the Willcox Station. He was survived by his parents, sister, and fiancee.

Day is done, Gone the sun, From the lake, From the hills, From the sky. All is well, Safely rest, God is nigh.
Posted by Mike Thiac at 10:06 PM