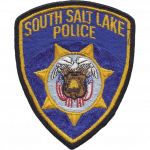 Police Officer David Romrell was intentionally struck by a vehicle fleeing from a burglary in progress at a business at 3575 South West Temple shortly before 10:00 pm.

He and other responding officers arrived at the scene as the suspects attempted to leave in a vehicle. The driver of the vehicle accelerated toward the officers and struck Officer Romrell. Other officers fired a the driver, killing him.

The passenger fled on foot but was apprehended by a canine unit a short time later.

Officer Romrell was transported to Intermountain Medical Center where he succumbed to his injuries while in emergency surgery.

Officer Romrell was a U.S. Marine Corps veteran and had served with the South Salt Lake Police Department for 11 months. He is survived by his wife and 4-month-old child.