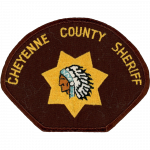 Deputy Jailer Randy Haddix passed away as the result of a heart attack he suffered while participating in a custody and control certification class at the Scottsbluff County Jail in Scottsbluff, Nebraska, on July 6th, 2018.

He was transported to a local hospital before being flown to the Medical Center of the Rockies, in Loveland, Colorado, where he passed away on July 9th, 2018.

Deputy Haddix was a National Guard veteran. He had served with the Cheyenne County Sheriff's Office for three months and had previously served with the Broken Bow Police Department for 15 years. He is survived by his wife, sister, and two brothers.