This shows you socialism...

Venezuela was the richest country in South America. It still has the largest proven reserves of oil in the world, at 298 million barrels. Coming in at second is Saudi Arabia, at 268 million barrels. It has multiple natural ports, a large amount of arable land and again, it was a very rich country. Until socialism took another nation hostage and did the best:


North Dakota Is Now Pumping as Much Crude as Venezuela 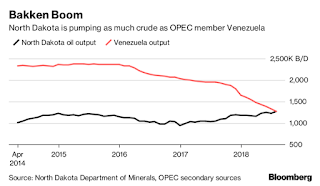 Home to the Bakken shale play, North Dakota pumped 1.27 million barrels a day in July, according to state figures released Friday. That’s roughly the same output as Venezuela during the month. The South American nation, whose oil industry has collapsed amid a prolonged financial crisis, saw production fall further in August to 1.24 million barrels a day -- about half the level seen in early 2016,s according to data from OPEC secondary sources.

Soaring output from shale formations, including the Bakken, helped the U.S. overtake Russia and Saudi Arabia to likely become the world’s biggest oil producer earlier this year, according to preliminary estimates from the Energy Information Administration. At the same time, Venezuela’s output is expected to tumble even lower, to 1 million barrels a day by the end of the year, according to the International Energy Agency.

One state of this nation is now producing more oil than the nation with the largest oil reserves on Earth. I discussed how the Bakken ranges were going hog wild in the early 2010s, and after a few slow years, is going full speed right now. And it’s not like they will run out anytime soon:


“…In 1954, Shell found oil in South Dakota's Harding County. By then, though, the momentum had moved north to the proven reserves in North Dakota, which is home to the Bakken formation. The U.S. Geological Survey estimates the Bakken contains more than 3 billion barrels of recoverable oil….”

So another formly prosperous nation is starving thanks to socialsm. Well, not everyone is starving 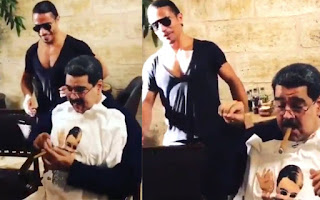 President Nicolás Maduro was seen dining with his wife on Monday at an Istanbul branch of Nusr Et, the international chain of restaurants owned by the Turkish chef Nusret Gokce, also known as "Salt Bae."

Maduro was in Istanbul for a stop-off on his way from China, where he went to ask for more loans for his economically stricken country.

Recent polls of Venezuelans show that many struggle to afford food, and the country often sees mass protests because of the economic hardship. The government has advised Venezuelans to breed rabbits for food as a way to beat their hunger...With oil at a five year high, Venezuela cannot feed itself. Well, some get fed. As my friend Darren at RotLC said, "In free countries, the rich become powerful. In socialist  countries, the powerful become rich."

As Orwell said, “Some pigs are more equal than others.”
Posted by Mike Thiac at 7:22 PM