I've been an ardent admirer of Justice Clarence Thomas since he came on the public scene, and survived the "high tech lynching" put on by those racist Democrats Joe Biden and Teddy Kennedy. His service on the Supreme Court has been very honorable and it looks like he's gonna keep on going, if only to piss off Chuck Schumer.

Now a few years ago I read his autobiography, My Grandfather's Son, and I've recommenced it to anyone wanting the story of a young man, with the world against him, who did well. And I had this dream of getting it autographed.

Well, I came up with a wild hair up my ass, and wrote the man a letter asking him to do that. And I enclosed a return envelope. Guess what came in today: 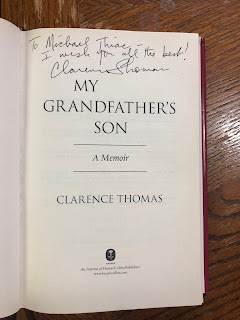 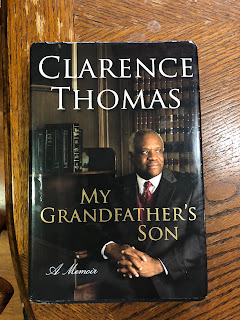 Will join the other autographed books in my office. Thank you Mr. Justice Thomas.
Posted by Mike Thiac at 11:25 PM