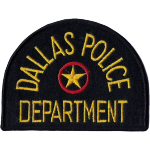 Senior Corporal Jamie Givens was struck and killed by a drunk driver while conducting a funeral escort for another Dallas police officer at approximately 5:30 am.

The procession was being escorted by motor officers along I-20 to a location in East Texas. Corporal Givens stopped to block traffic entering the highway at Bonnie View Road. He was stationary on his motorcycle, with its emergency lights activated, when he was struck by a vehicle traveling at a high rate of speed.

He was transported to Baylor Hospital where he was pronounced dead.

The driver who struck him was arrested and charged with DUI.

Corporal Givens had served with the Dallas Police Department for 32 years.