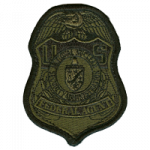 Federal Agent Kristopher Youngberg was killed in a vehicle crash on I-40 near Okemah, Oklahoma.

He and four other agents had attended training at Fort Chaffee, Arkansas, and were returning to Amarillo, Texas, in a department van. The van struck the back of a dump truck that was attempting to make a U-turn in the median of the interstate. Agent Youngberg suffered fatal injuries at the scene while three of the other agents were critically injured.

Agent Youngberg was a U.S. Marine Corps veteran and had served with the National Nuclear Security Administration - Office of Secure Transportation for eight years. He is survived by his wife, two children, father, and sister.