In 1984, I met MSG Richard Chism for the first time. He intimidated the hell out of me. Vietnam veteran, Special Forces, he was a sight. And I learned a hell of a lot from the man. It was scary how silently he could walk through a forest. I was honored to serve him as best man later in life. And I was also honored with a more depressing duty, to serve as a pallbearer.

I was a very dismal day in October, 2003, I received a call from his wife, telling me he had passed in the night. I drove up the next day, and with five other friends, escorted him to his final resting place.

I can't believe it'e been 16 years since that dark day. I finally got up to visit his final resting place. It took a while to find it, a small grave yard in the middle of a very small town. But I think we would have appreciated me riding up on my Harley Davidson to visit. The last time I saw him we rode together, me on my old Kawasaki, him on his new Gold Wing. Damn I wish we could take another ride. 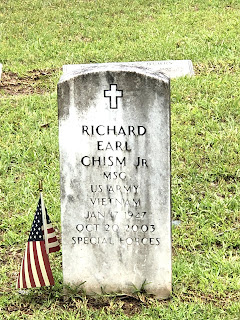 I spent around 20 minutes with the man. Wish I had some stuff to clean the marker, it needs it. I'll be prepared next time around (and the flag needs replacement). I left a dime to mark the visit.

As I'm approaching 55 years on this earth, I know something will become more commonplace. Funerals. No one gets out of here alive, we're not young anymore, and friends are passing. This August I will ride to New York, and I'll pass by Arlington National Cemetery. I have two friends buried there. I'm seeing a pattern, unfortunately.

Rest in Peace Rich. We'll link up again sometime. And damed do I miss you.

Email ThisBlogThis!Share to TwitterShare to FacebookShare to Pinterest
Labels: Family/Friends