Bob Seger has Turned the page...

On May 2, 2019, Beth and I had the pleasure of seeing Bob Seger preform his likely last concert in Houston. The 73 year old rock icon is on his final tour. For a half century he's been writing songs, putting out music, and entertaining millions. But all good things must come to an end, and that time has come. 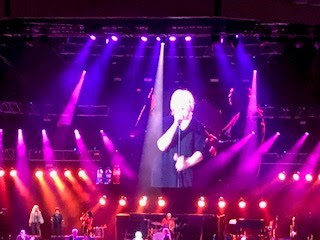 After a delay caused by a moron blocking the Grand Parkway, we ate dinner, and then made it to the Cynthia Woods Mitchell Pavilion, just in time to get rained on. And thunder, and lighting. Nice to give us a two hour delay, then it starts. Beth held out as long as she could, but she unfortunately had to go to work on Friday morning. I could at least sleep in. And as I looked around the attendees, I noticed we mostly had gray hair. Unfortunately we were not 20 somethings, able to be out all night and be functional the next day. But I wouldn't have missed this concert for the world.

I'll leave you with these two videos. I started to record the entire show, but I decided no. Just sit back and enjoy it. But I did get these two great songs from the man. Thank you Bob Seger and the Silver Bullet Bank for all the memories.

Have a great week.

Email ThisBlogThis!Share to TwitterShare to FacebookShare to Pinterest
Labels: Music