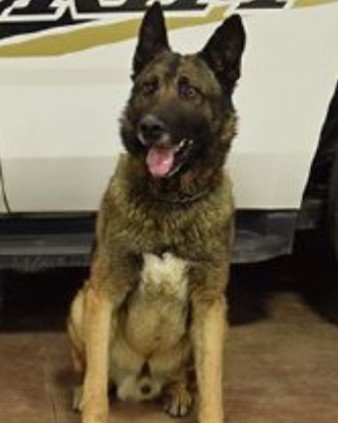 K9 Havoc was struck and killed by a vehicle on Vineyard Road in the area of Vineyard Beach at 9:15 am.

His handler stopped to let K9 Havoc take a break in a parking lot more than 200 feet from the roadway. As K9 Havoc inspected the area he suddenly ran towards the roadway and failed to obey his handler's commands to return. He was struck by a vehicle once he entered the roadway.

He was able to return to his handler who immediately took him to a veterinary clinic. He passed away approximately one hour later while being treated for his injuries.

K9 Havoc had served with the Utah County Sheriff's Office for 6-1/2 years and was certified in narcotics detection and patrol. He had taken third place in vehicle narcotics search at the Las Vegas Metro Police K-9 Trials in October 2018.

Rest in Peace Havoc…till our next roll call at the Rainbow Bridge!