Sometimes life gives you some schadenfreude...

Domestic terrorist groups like Black Lives Matter and Cop Block can be annoying or dangerous, depending on what they are doing. So I must say this gives me a smile. 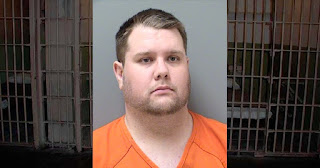 Jonathan Beavers, 29, has been charged with four counts of harassing communications, two counts of obstruction of an officer, and one count of impersonating an officer, Cherokee Sheriff’s Office (CSO) Sergeant Marrianne Kelley told the Cherokee Tribune and Ledger-News.

“The Criminal Investigations Division identified the suspect as Beavers and executed a search warrant at his residence. Investigators located evidence to further their investigation,” Sgt. Kelley said....

The fact he would impersonate an officer, I can see that. Why drive all around looking for police actions when you can make them up. but this is definitely believable:


Beavers resides with his mother, Woylene Waldroup, who denied that her son would ever think to impersonate an officer.

“He would never do that. Never,” Waldroup told WSB-TV.

That old, living with his parents, no apparent job. Snowflake.


...Beavers is the founder of Georgia Cop Block, an affiliate of a national unorganized collective called Cop Block, the Cherokee Tribune and Ledger-News reported.

Beavers frequently listened to police communications on his scanner, and would respond to locations where officers were dispatched, WSB-TV reported.

He would then record law enforcement officers’ actions using his cell phone...

...His father, Milton Beavers, claimed that his son was arrested because he is trying to hold police accountable for their actions.

"That's the first thing they said when they came through the door, 'Cop Block," Milton told WSB-TV. "They have a vendetta against Jonathan."

"They busted through the door. I made them go get the search warrant. They were in there looking for some sort of CDs," Waldroup said.

Even after investigators allowed Beavers’ parents to listen to the radio call that led to his arrest, they said they still were not convinced it was the voice of their son.

"They may have some audio stating that is Jonathan, but you actually have to prove Jonathan actually mashed that button and that button wasn't mashed accidentally," Waldroup argued...

I think I see where the snowflake gets his inspiration. Please Mr Waldroup, when the wolves are the door, breaking in, and you're scared as hell...call Black Lives Matter or Cop Block (sarcasm off).
Not to be outdone, we have the national group:


...Cop Block founder Adam Mueller, also known as Ademo Freeman, was arrested in February for drug trafficking. He then sold the group's Facebook page with over one and a half million followers to a media company that works to make money off of anti-police fake news...

Just so people know what Mr. Mueller was carrying:


LEBANON, Ohio -- The founder of CopBlock.org -- a blog routinely critical of police -- was arrested in Warren County on drug trafficking charges.

Adam Mueller, 34, was traveling on I-71 in Warren County Feb. 9 when he was pulled over for a license plate violation, according to the Ohio State Highway Patrol. Troopers said they could smell "raw marijuana" as they approached the vehicle. Twenty-four pounds of marijuana and 26 vials of hash oil were found in the car.

Highway patrol said the marijuana and oils seized in the stop was worth $56,040. Mueller was charged with possession and trafficking marijuana and possession of hash oil. He was also cited for a missing rear plate light...

The bad thing is he'll probably be fined more for the missing plate light than the narcotics.

Good to know law enforcement has such capable enemies....

Happy New Year!
Posted by Mike Thiac at 9:57 AM