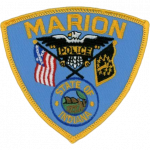 K9 Assuan died as the result of injuries sustained during a criminal apprehension training exercise at the Marion Police Athletic Club facility at 555 East Morton Street.

He failed to negotiate a fence jump at high speed and struck his head on the fence's top rail. He immediately became unresponsive as a result of the injury. His handler transported him to a local veterinary hospital where he died without regaining consciousness.

K9 Assuan had served with the Marion Police Department for five years.

Rest in Peace Assuan…till our next roll call at the Rainbow Bridge!