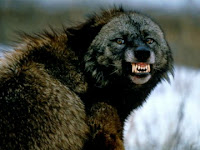 There is no safety for honest men except by believing all possible evil of evil men. - Edmund Burke

A few weeks after Columbine I was listening a radio show and they were interviewing the author of On Killing, the Physiological Effects of War and Killing on Society.  The items covered were the differences in the mindsets of killers and, for lack of a better term, normal people. Well I fell upon this article by the sae an on separating people into three groups:  Sheep, wolves and sheepdogs.

By LTC (RET) Dave Grossman, author of "On Killing."

...One Vietnam veteran, an old retired colonel, once said this to me:

"Most of the people in our society are sheep. They are kind, gentle, productive creatures who can only hurt one another by accident." This is true. Remember, the murder rate is six per 100,000 per year, and the aggravated assault rate is four per 1,000 per year. What this means is that the vast majority of Americans are not inclined to hurt one another. Some estimates say that two million Americans are victims of violent crimes every year, a tragic, staggering number, perhaps an all-time record rate of violent crime. But there are almost 300 million Americans, which means that the odds of being a victim of violent crime is considerably less than one in a hundred on any given year. Furthermore, since many violent crimes are committed by repeat offenders, the actual number of violent citizens is considerably less than two million.

Thus there is a paradox, and we must grasp both ends of the situation: We may well be in the most violent times in history, but violence is still remarkably rare. This is because most citizens are kind, decent people who are not capable of hurting each other, except by accident or under extreme provocation. They are sheep.

I mean nothing negative by calling them sheep. To me it is like the pretty, blue robin's egg. Inside it is soft and gooey but someday it will grow into something wonderful. But the egg cannot survive without its hard blue shell. Police officers, soldiers, and other warriors are like that shell, and someday the civilization they protect will grow into something wonderful.? For now, though, they need warriors to protect them from the predators.

"Then there are the wolves," the old war veteran said, "and the wolves feed on the sheep without mercy." Do you believe there are wolves out there who will feed on the flock without mercy? You better believe it. There are evil men in this world and they are capable of evil deeds. The moment you forget that or pretend it is not so, you become a sheep. There is no safety in denial.

"Then there are sheepdogs," he went on, "and I'm a sheepdog. I live to protect the flock and confront the wolf."

Let me expand on this old soldier's excellent model of the sheep, wolves, and sheepdogs. We know that the sheep live in denial, that is what makes them sheep. They do not want to believe that there is evil in the world. They can accept the fact that fires can happen, which is why they want fire extinguishers, fire sprinklers, fire alarms and fire exits throughout their kids' schools.

But many of them are outraged at the idea of putting an armed police officer in their kid's school. Our children are thousands of times more likely to be killed or seriously injured by school violence than fire, but the sheep's only response to the possibility of violence is denial. The idea of someone coming to kill or harm their child is just too hard, and so they chose the path of denial.

The sheep generally do not like the sheepdog. He looks a lot like the wolf. He has fangs and the capacity for violence. The difference, though, is that the sheepdog must not, can not and will not ever harm the sheep. Any sheep dog who intentionally harms the lowliest little lamb will be punished and removed. The world cannot work any other way, at least not in a representative democracy or a republic such as ours.

Still, the sheepdog disturbs the sheep. He is a constant reminder that there are wolves in the land. They would prefer that he didn't tell them where to go, or give them traffic tickets, or stand at the ready in our airports in camouflage fatigues holding an M-16. The sheep would much rather have the sheepdog cash in his fangs, spray paint himself white, and go, "Baa."

Until the wolf shows up. Then the entire flock tries desperately to hide behind one lonely sheepdog....

...Understand that there is nothing morally superior about being a sheepdog; it is just what you choose to be. Also understand that a sheepdog is a funny critter: He is always sniffing around out on the perimeter, checking the breeze, barking at things that go bump in the night, and yearning for a righteous battle. That is, the young sheepdogs yearn for a righteous battle. The old sheepdogs are a little older and wiser, but they move to the sound of the guns when needed right along with the young ones.

Here is how the sheep and the sheepdog think differently. The sheep pretend the wolf will never come, but the sheepdog lives for that day....

...There is nothing morally superior about the sheepdog, the warrior, but he does have one real advantage. Only one. And that is that he is able to survive and thrive in an environment that destroys 98 percent of the population. There was research conducted a few years ago with individuals convicted of violent crimes. These cons were in prison for serious, predatory crimes of violence: assaults, murders and killing law enforcement officers. The vast majority said that they specifically targeted victims by body language: slumped walk, passive behavior and lack of awareness. They chose their victims like big cats do in Africa, when they select one out of the herd that is least able to protect itself....

Here is the point I like to emphasize, especially to the thousands of police officers and soldiers I speak to each year. In nature the sheep, real sheep, are born as sheep. Sheepdogs are born that way, and so are wolves. They didn't have a choice. But you are not a critter. As a human being, you can be whatever you want to be. It is a conscious, moral decision.

If you want to be a sheep, then you can be a sheep and that is okay, but you must understand the price you pay. When the wolf comes, you and your loved ones are going to die if there is not a sheepdog there to protect you. If you want to be a wolf, you can be one, but the sheepdogs are going to hunt you down and you will never have rest, safety, trust or love. But if you want to be a sheepdog and walk the warrior's path, then you must make a conscious and moral decision every day to dedicate, equip and prepare yourself to thrive in that toxic, corrosive moment when the wolf comes knocking at the door.

For example, many officers carry their weapons in church.? They are well concealed in ankle holsters, shoulder holsters or inside-the-belt holsters tucked into the small of their backs.? Anytime you go to some form of religious service, there is a very good chance that a police officer in your congregation is carrying. You will never know if there is such an individual in your place of worship, until the wolf appears to massacre you and your loved ones...

I was training a group of police officers in Texas, and during the break, one officer asked his friend if he carried his weapon in church. The other cop replied, "I will never be caught without my gun in church." I asked why he felt so strongly about this, and he told me about a cop he knew who was at a church massacre in Ft. Worth, Texas in 1999. In that incident, a mentally deranged individual came into the church and opened fire, gunning down fourteen people. He said that officer believed he could have saved every life that day if he had been carrying his gun. His own son was shot, and all he could do was throw himself on the boy's body and wait to die. That cop looked me in the eye and said, "Do you have any idea how hard it would be to live with yourself after that?"...

...Their only response to the wolf, though, is denial, and all too often their response to the sheepdog is scorn and disdain. But the sheepdog quietly asks himself, "Do you have and idea how hard it would be to live with yourself if your loved ones attacked and killed, and you had to stand there helplessly because you were unprepared for that day?"

In September 04 in Russia we had the Beslan school hostage crisis where several dozen Chechen militants held hundreds of children hostage, letting them go mad with thirst, shooting any kid who made it to water.  We can only hope there is a special level of hell for them.  And yes, cops need to travel armed so we cab take action when needed.

It is denial that turns people into sheep. Sheep are psychologically destroyed by combat because their only defense is denial, which is counterproductive and destructive, resulting in fear, helplessness and horror when the wolf shows up.

How many people though 19 maniacs would fly planes into buildings....or butcher children.  Some months ago I testified in the trial of a chid rapist and saw the face of pure evil.  I almost felt a tinge of sympathy for the devil.  Not the piece of human fecal matter on trial but defense  attorney...you gotta defend that!  I have no doubt this was not his best outing defending someone...he has kids too.

To all the sheepdogs out there, stay vigilant and be prepared.  A quote attributed to George Orwell summarized our relations with the majority of public we serve, "People sleep peaceably in their beds at night only because rough men stand ready to do violence on their behalf.”