Thermal Cameras used while driving down the street.

Am I the only cop with issues on this 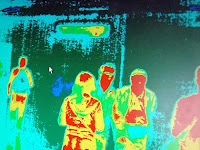 BOSTON (CBS) – A thermal imaging project in the city of Boston has been put on hold because of privacy concerns.

Boston officials had hoped to have aerial and street-level photos taken across about four square miles of the city this winter using infrared cameras that would show heat loss in the city homes.

Officials planned on sharing the photos and analysis with homeowners, and were hoping the findings would increase enrollment in efficiency programs and also create business opportunities.

But, the project hit a snag when the American Civil Liberties Union of Massachusetts raised concerns that the infrared cameras would reveal information about what’s going on inside the homes. Sagewell’s cameras can take up to 20,000 images of homes per day.

Despite the concern, towns outside of Boston have not had any problems with the program. Utilities and environmental groups from Springfield and Hamilton are in the process of initiating the same project in their communities.

Supposedly this would only be to see if there are "efficiency" issues but it could also be used for law enforcement issues and I have major issues with it for either purpose. If you want to enter my house it has to be done with my consent or by court order. Period.

Gee, I wonder if the Boston government had a shutdown would the idiots who thought of this be considered essential?
Posted by Mike Thiac at 11:07 AM