I hope she calls the local crack pusher next time someone is breaking into her house.

The controversial post to the councilwoman’s personal page read: 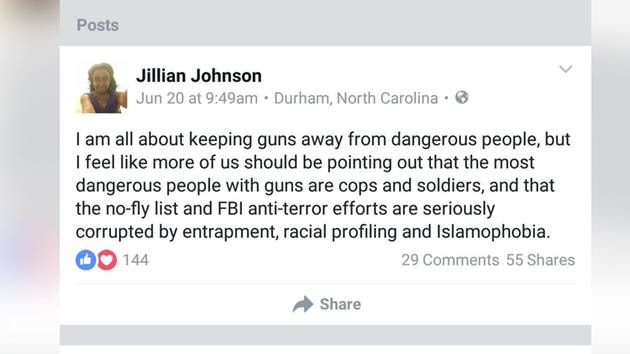 “I am all about keeping guns away from dangerous people, but I feel like more of us should be pointing out that the most dangerous people with guns are cops and soldiers, and that the no-fly list and FBI anti-terror efforts are seriously corrupted by entrapment, racial profiling and Islamophobia.”

Johnson’s post has since been deleted and today she posted a ‘clarifying statement’ to her city council Facebook page in response to ‘some concern in the community’ over her original post.

However, instead of apologizing for the illogical original post that demonized our nation’s heroes, she doubled-down using faulty logic on what she calls ‘state-sanctioned violence.’ In the new post, Councilwoman Johnson tries to deflect from her original comments by stating lies perpetuated by politicians about the military budget, incarceration rate and police homicide rate. 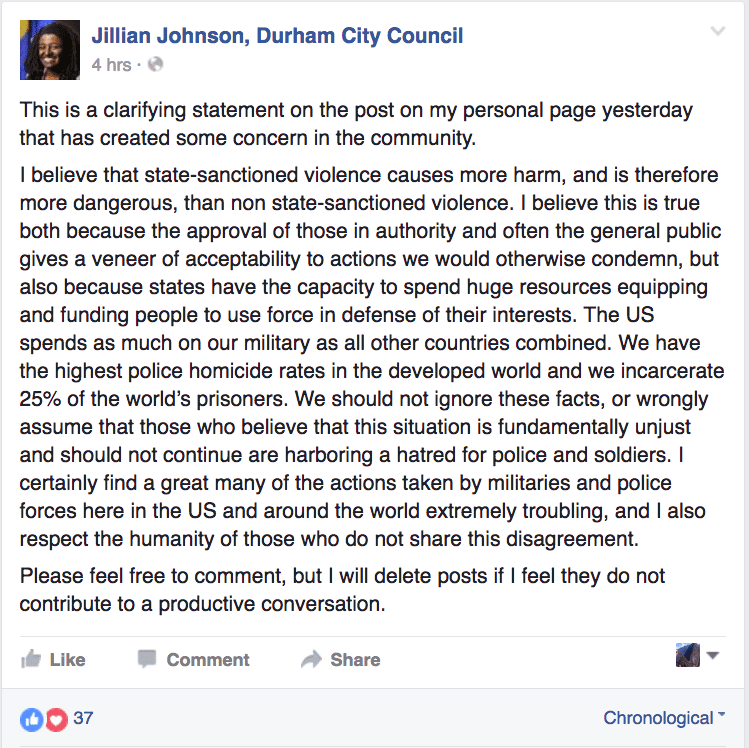 Just for good measure, let’s take a look at some of those false talking points; statements that even presumptive presidential nominee Hillary Clinton still uses in her speeches.

The first is the myth that the U.S. incarcerates 25% of the world’s prison population. This is based on a study by a British organization that has it at 22%, but doesn’t take into account people in prison in several countries like North Korea, Somalia and Eritrea. A report by the Washington Post also highlights that figures from China and Iran are likely grossly underreported. Finally on that point, the high incarceration rate in the U.S. is tied to sentencing for drug offenders, which many in law enforcement will argue has significantly reduced crime since the 1980’s and 1990’s.

The second falsehood in Johnson’s ‘clarifying statement’ is that the ‘US spends as much on our military as all other countries combined,’ which is simply false. It’s true, that the U.S. spends more than the next 7-8 countries with the largest militaries combined, but that’s about it. It’s amazing that there are people out there who actually believe statements like this.

Councilwoman Johnson also mentions that the U.S. has the highest police homicide rate in the developed world. For that to be true, what she considers the developed world must be a small place considering police in the city of Rio de Janeiro are responsible for nearly 1,000 deaths per year, nearly twice the number of that by police in America.

So not only does this woman have a distorted world view, she’s not humble enough to admit when she made a mistake and she’s more than willing to spew factually deficient anti-law enforcement and anti-military propaganda. Perhaps it’s time the city of Durham rethink who they vote into office.


I honestly don't know if she is just that stupid or is she lying though her teeth, both are plausible. If this is what passes for "leadership" in this city, it's doomed. God helps the people and the cops of Durham NC.
Posted by Mike Thiac at 4:06 PM