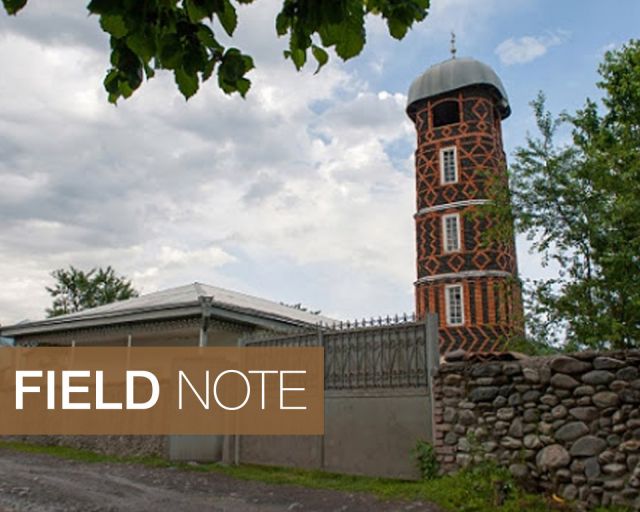 As you drive northeast out of the Georgian capital of Tbilisi, you enter a different world. While the nation as a whole is more than 80 percent Orthodox Christian, the Pankisi Gorge in the Greater Caucasus Mountains just 161 kilometers (100 miles) from the capital is home to 8,000 Sunni Muslims from the Kist ethnic group. Instead of the iconic church bells of Tbilisi, you hear the call to prayer five times a day.

Historically, the region was a paragon of religious harmony, with Kists living alongside Christian Georgians and Ossetians. This held even through the 19th century when Orthodox Russia squared off against recalcitrant Muslim Chechens — a conflict that often took on the character of a holy war.

But things changed in the early 1990s when Chechen separatists declared independence. The Kists have strong cultural ties with both the Chechens and Ingush groups across the border. Chechen fighters and refugees fleeing the conflict flocked to Georgia and into the Muslim communities of the Pankisi Gorge. For several years, militants staged regular raids back into Chechnya and other Caucasus republics belonging to the Russian Federation. Christian Ossetians began to abandon their homes because of the influx, leaving for other parts of the country.

On entering the tiny village of Jokolo in the Pankisi Gorge, the first thing you notice is a large mosque alongside the only paved road, which runs through the gorge along the Alazani River up into the mountains. The mosque is clearly the center of life here, flanked by a single line of desolate shops and market stalls. There is one restaurant that is open only on special occasions. Young men with red and black beards milled around the entrance to the mosque, seemingly with little else to do.

With the arrival of the Chechens in the 1990s, the area saw major inroads by a once-alien form of Islam: Wahhabism. In recent years, the Pankisi Gorge has become infamous as a fertile recruiting ground for the Islamic State, which seeks to swell its ranks (and prestige) by bringing in foreign fighters to wage jihad in Syria and Iraq.
Islamic State leader Abu Omar al-Shishani hailed from the region. Born in the village of Birkiani as Tarkhan Tayumurazovich Batirashvili, al-Shishani fought against Russia in the 2008 Russo-Georgian War and became radicalized soon after. I went to find the home of his father, 72-year-old Temur Batirashvili. Georgian TV channels that week were broadcasting reports of al-Shishani's death, and I wondered how his father was reacting to this news. Rumors of his son's death have been circulating since at least 2014 but have proved wrong time and again. Each time, his father declined to comment to the media. But as I passed his father's house, I saw that the gates had been flung open and people were pouring in, undeniable proof that Temur had received confirmation of his son's death, corroborated by the Islamic State shortly after on July 13.

With the Islamic State fighting for its continued existence in Syria, it is doubtful that al-Shishani will be the last native of the Pankisi Gorge to die. Other, less celebrated sons and daughters have followed al-Shishani to the killing fields of Iraq and Syria. Driving through the region gave me a clue as to why. In addition to the desire for glory, there is another, simpler reason for their exodus: economic stagnation. There is little for the youth of the region to do. Communities look as if they are dying. The internet is the only thing that offers young people possibilities outside of their village — and all too often the internet offers a doorway to transnational jihad.

Residents have repeatedly reported this problem to authorities. Many allege that the Islamic State has done more than recruit online, insisting that the group has sent an agent to the gorge to make connections in person. The government, however, denies that the Islamic State has sent a recruiter to the Pankisi Gorge and downplays how many Chechens and Kists have joined to the self-proclaimed caliphate. (The government officially puts the number at 50, but local estimates suggest it is actually 200 or more.)

Finding the family of a foreign fighter was not difficult. The village of Dumasturi, for example, is typical of the region. The main economic activity there is raising livestock, including cattle, sheep and some buffalo. Most of the village, however, is abandoned, roofs and walls collapsing after years of neglect. I met a woman named Tina Alkhanishvili in the village. She told me her husband had abandoned her and moved to Grozny, the Chechen capital, where he started a new family. She and her children live in poverty.

Her son, Ramzan Alkhanishvili, was just 18 years old when he disappeared to join the Islamic State in April. His mother dropped him off at school in the morning, as she normally did. A few hours later, around noon, he left and never returned. His mother waited until evening, and then she and relatives began to search for him, asking friends and acquaintances if they knew what had happened. No one knew anything. That night they went to the closest police station, located in the center of a nearby village. I passed by the police station, which was so brightly lit that it looked like a UFO around the poor Georgian houses, built from stone and covered with circular tiles. Ramzan was accompanied by a 16-year-old boy. Tina was left wondering how a 16-year-old managed to purchase tickets and board an airplane in Tbilisi bound for Turkey. She implied this could not have been organized independently by her son; he must have had the hands-on assistance of Islamic State agents.

Her life is emblematic of many in the Pankisi Gorge — waiting to see what will happen next, as the youth they love disappear and their communities crumble. And all for conflicts outside of their isolated river valley.

In Search of the Islamic State in Georgia is republished with permission of Stratfor.
Posted by Mike Thiac at 11:40 PM