Another example of Lies, Damned Lies and Statistics.....

Leftist media loves to use statistics to show how ugly, unfair, etc life in America is. And in this article, a B Hussein Obama sycophant in the Washington Post on policer murder by pistol in the last few decades. Here are excerpts, with commentary:

Police are safer under Obama than they have been in decades

In the aftermath of the mass shooting of a dozen police officers in Dallas this week, some conservatives rushed to lay blame for the incident at the feet of the Obama administration.

These statements are part of a broader narrative of a "war on cops" carried out by the Obama administration and/or the Black Lives Matter movement, depending on whom you ask. It's certainly true that some shooters of police, such as the Dallas attacker, appear to be motivated by a hatred of white police officers or a twisted urge to seek revenge for police shootings of black Americans. But the simplistic and inflammatory notion of a "war on cops" is completely undercut by one fundamental data point: Intentional attacks on police officers are at historically low levels under President Obama...


No Mr. Ingraham, he wanted to murder whites, especially white officers. From your own newspaper, the Washington Post, the day before you published this article, so you had time to read it.:


...The gunfire was followed by a standoff that lasted for hours when the attacker told authorities “he was upset about the recent police shootings” and “said he wanted to kill white people, especially white officers,” according to Dallas Police Chief David Brown....

Data from the Officers Down Memorial Page, which tracks law enforcement officer fatalities in real time, illustrates the point. During the Reagan years, for instance, an average of 101 police officers were intentionally killed each year. Under George H.W. Bush that number fell to 90. It fell further, to 81 deaths per year, under Bill Clinton, and to 72 deaths per year under George W. Bush.

Under Obama, the average number of police intentionally killed each year has fallen to its lowest level yet — an average of 62 deaths annually through 2015. If you include the 2016 police officer shootings year-to-date and project it out to a full year, that average of 62 deaths doesn't change.

It's worth pointing out that in 2016, year-to-date officer fatalities via shooting only are up 44 percent over last year, according to the numbers compiled by the National Law Enforcement Officer's Memorial Fund. But that's partially an illustration of how sensitive these numbers are to individual incidents: If you set the Dallas shootings aside, the year-over-year increase is only 17 percent. And as Eugene Volokh points out, the 2016 numbers are roughly on par with the numbers for the past 10 years.

Mr Ingraham, like many a leftist you take out some a factor that distort statistics.In the years since the 1970s, the deployment of Kevlar and ceramic vest have saved thousands of officers. A cop fired upon, hit, and not killed because the vest stopped the bullet (or made the difference) is not counted as dead. You do rightly credit the advent of trauma centers throughout the nation, especially in large cities, has made a cop's chance (or any person's chance, for that matter) of living through a shooting much greater.

...These figures in the chart above include all incidents in which a suspect intended to kill a police officer — shootings, stabbings, assaults, bombings and vehicular assaults. They exclude such things as accidental shootings, job-related illnesses and traffic accidents. If you were to narrow it down to just shootings, the overall trend would be roughly the same: from 80 deaths annually under Reagan to 48 annually under Obama. Again, factoring in the 2016 shooting numbers, including Dallas, has a negligible effect on the average under Obama.

These falling fatality numbers aren't simply a function of better medical care for injured officers. Overall assaults on officers are down, too. In 1988, the last year of the Reagan administration, there were 15.9 assaults for every 100 sworn law enforcement officers according to the FBI. In 2000, at the end of the Clinton administration, there were 12.7 assaults for every 100 officers. By the end of the Bush administration that number fell further to 11.3. Under Obama in 2014, the most recent year for which the FBI has data, that number further fell to 9.0....


Mr Ingraham, here are the numbers from the ODMP, including Dallas and Baton Rouge. The number of officers murdered by gunfire by this date is up %82 compared to this time last year. 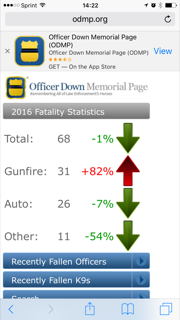 Some non-statistical points to make. One, the motive of both shooters in Dallas and Baton Rouge are well know, they wanted to revenge the shooting by police of black thugs.

Two, the difference is the current president is doing his best to encourage, excuse and embrace the shooters. He brought leaders of Black Lives Matter to the White House and called them better community organizers then he was. He is lying about people, encouraging others to riot and trying to federalize police, ala the Third Reich.

Any drop in fatalities of police is good news. However, it is spite of O Hussein Obama, in no reason because of him.
Posted by Mike Thiac at 2:46 PM