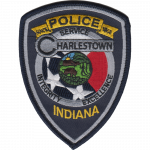 He had attempted to stop a stolen vehicle but the driver refused to stop. As the pursuit neared State Road 56, in Scott County, Sergeant Bertram's vehicle left the roadway and struck a tree. Other officers in the pursuit immediately stopped and rendered aid but Sergeant Bertram succumbed to his injuries at the scene.

The driver continued to flee but was apprehended in Clark County. He was charged with resisting law enforcement resulting in death and auto theft.

Sergeant Bertram's canine partner survived the crash and was treated at a local veterinary hospital.

Sergeant Bertram had served with the Charlestown Police Department for nine years. He is survived by his parents.