George Floyd, in a better context...

As soon as I saw the video of the death of George Floyd, with then Officer Derek Chauvin putting pressure on Floyd's neck, I knew this would get ugly. I know, that is an understatement. However, using force always looks ugly. Try it from our side when you're hoping you can get this thug into cuffs, or at least hold on till the calvary arrives.

One point I've made, multiple times, is don't judge immediately, let the process work its way out. I had cops tell me I was wrong and this would cause issues with the black community. I've had to explain, too many times to count, I'm not saying Chauvin is innocent. I'm saying let this play out, we need to know the full story. And I may have a radical thought here, but Chauvin is the defendant (and the source of the indictment is under question, different issue for different post), and has a right to his day in court. I posted an article on this in American Thinker a few years back.

In a recent article in the American Spectator, George Parry, reviews the recently released videos of the Floyd arrest, and the actions of the officers. But of particular interest, he reviews the toxicology results from the autopsy report. From page 2: 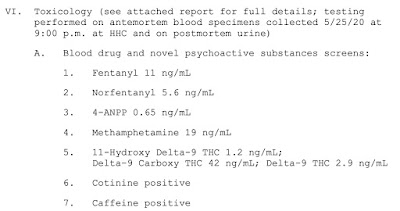 ...The autopsy report by the Hennepin County Medical Examiner’s Office is titled “CARDIOPULMONARY ARREST COMPLICATING LAW ENFORCEMENT SUBDUAL, RESTRAINT, AND NECK COMPRESSION.” Strangely enough, the report, which thoroughly sets forth in detail all physical and toxicological findings, makes no other mention of the purported cause of death. In fact, the first iteration of the report didn’t even mention “law enforcement subdual, restraint, and neck compression,” and the criminal complaint filed by prosecutors stated that the autopsy “revealed no physical findings that support a diagnosis of traumatic asphyxia or strangulation (Emphasis mine).”

Moreover, prior to issuing the autopsy report, the Hennepin County Medical Examiner preliminarily found that the “autopsy revealed no physical findings that support a diagnosis of traumatic asphyxia or strangulation. Mr. Floyd had underlying health conditions including coronary artery disease and hypertensive heart disease. The combined effects of Mr. Floyd being restrained by the police, his underlying health conditions and any potential intoxicants in his system likely contributed to his death.” (Emphasis added.)

These preliminary findings by the Medical Examiner were incorporated in the Statement of Probable Cause attached to the arrest warrant for Officer Chauvin, which was filed on May 29, 2020. This date is significant because, as you will see, neither the Medical Examiner nor the prosecutors had yet received Floyd’s toxicology report. That report was issued by NMS Labs of Horsham, Pennsylvania, on May 31, 2020.

In short, Chauvin was charged with third-degree murder (later raised to second-degree murder by Minnesota Attorney General Keith Ellison) without the benefit of a complete and competent investigation of all the relevant facts and circumstances of Floyd’s death...

In English, Floyd's underlying medical issues (coronary artery disease and hypertension), the overdose of fentanyl (at three times the toxic level) and methamphetamines, plus the actions of the officers on the scene, were responsible.

Putting those three factors together, plus Mr. Floyd's actions on the scene, does that add up to a murder or manslaughter charge (Minnesota does not have criminal negligent homicide on their criminal code)? A very good question, and it may have a bad answer for many people. The AG of Minnesota is trying to take over for what should be a local court to handle. Call me a cynic, but I see a man hoping to use this trial to make a political advance. Suffice to say, I'm thinking there is more riot overtime in my future.