Before you ever see the cops, we hear these people....

As a kid one of my favorite shows was Adam-12, the story of two LA police officers working the beat. Many a cop (myself included) were inspired by the story of officers Mally and Reed. But at the beginning of every episode, you heard the dispatcher caller out their numbers:


Sometimes, when you hear the alert tone, it feels like this: 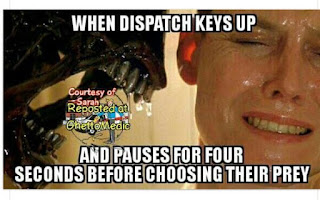 But on a more serious note, emergency centers are having a problem hiring staff:

Tight labor market has made it harder to recruit; ‘We need a warm body’

Cities across the U.S. are struggling to find 911 dispatchers as a historically tight labor market makes it harder to fill a job that was already a tough sell.

Dispatchers are a linchpin of the nation’s emergency-response infrastructure. Their responses to 911 calls directly impact how quickly police, firefighters and other first responders are sent to help and whether they go to the right place.

They are also hard to hire, since the job can require workers to make snap judgments on life-or-death situations, often based on incomplete information, for about what they could make working as a manager at a retail store...

...“For a lot of them, the requirement is, ‘We need a warm body’,” said Christy Williams, director of 911 for the North Central Texas Council of Governments. The problem is exacerbated because many 911 centers are small and lack the resources to pay up for workers or training.

The Cowlitz County 911 Center in Washington is trying to hire six new dispatchers, said its director, Deanna Wells. In the meantime, the center’s 16 current dispatchers are working more than 200 hours of overtime a month...

Seeing four weeks, at fourty hours a week, is 160 hours a month, they are working double shifts, plus!:


..Officials charged with staffing centers in several regions of the U.S. say they have struggled to hire 911 telephone operators as the unemployment rate has ticked down.

Emergency call-center jobs can be emotionally taxing. Callers are often in distress and sometimes still in the throes of a traumatic event. They can cry, yell at or grow frustrated with 911 center employees trying to gather information to help them dispatch first responders.

A 911 center operator may hear gunshots, callers being wounded or killed while they are on the phone, or be the first person to speak with someone who has found a deceased loved one. Some centers offer counseling with local religious leaders or trained therapists, but not all have those services.

Operators are “getting negative information all the time. The aura is kind of negative,” said Andrew Dziegielewski, emergency communications director for the Portland Regional Communications Center in Maine...


Dispatchers and emergency call takers don't need a college degree, but they need to know how to get the correct information, prioritize, recognize frequent flyers, know which houses to automatically send multiple units to, and stay calm themselves. In a word, it's an impossible job, see cops, firefighters, etc. And it’s a simple case of supply and demand. The agencies must pay the people enough they will start working a challenging job, and allow them to have a life.

Welcome to hiring for emergency services.