The beginning voyage of the USS Enterprise....

I've visited the Smithsonian two or three times over my life. Somewhere I have a picture of original USS Enterprise, and I rememember this article from a few year ago: 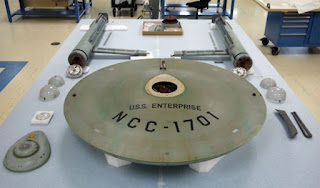 Fans of Star Trek: The Next Generation and later Trek productions know that computer graphics were used extensively, meaning there generally aren’t models of the Enterprise from Picard’s reign on. In the original series, the Enterprise was an 11-foot long model that had lights inside. The screen-used model that was featured in the filming of every one of the 79 episodes of the original series is now undergoing refit.

That refit is underway at the Smithsonian’s National Air and Space Museum in the nation’s capitol. Preservation work on the model is ongoing, and the starship it is being restored to look like the Enterprise as it was seen in The Trouble with Tribbles episode of the show...

Well, I got this today from an old friend and I couldn't let it go:

You know there were some people on the lot asking, "What the hell is that?!"

Answer: History in the making!

Thanks Claude Z for the pic.