Having lived in the Deep South most of my life, I can relate to not having power in August. It's miserable without air conditioning. Not to mention your frig and freezer last only so much. One of the major issues recoving from Hurricane Katrina was refrigerators and freezers containing a HAZMAT site of spoiled meats and other items.

Now I'm fortunate, my subdivision was built in the last 30 years, so our main power cables are buried. During Hurricane Harvey, my family was out of power for only 18 hours. But an issue, what happens when the power plant is out. Well, here is a solution for than issue. 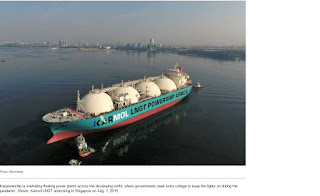 Vessels can hook into an onshore grid quickly, sidestepping the red-tape and construction issues involved with building a traditional power plant. And these ships come with their own fuel -- liquefied natural gas and fuel oil -- tapping into markets that are currently oversupplied.

"We can deploy them in less than 30 days," Zeynep Harezi, chief commercial officer of Kapowership, said by phone from her office in Istanbul where the ships are designed.

The generators on the ships can produce between 36 megawatts to 470 megawatts of electricity and are already fully financed. While the ships use fossil fuels and present a challenge to the global drive for cleaner energy, they remain among the few solutions for feeding power to remote areas.

Such ships can work well in places with high barriers for onshore power stations or that lack access to gas pipelines, the International Gas Union said in its annual LNG report. There's also risks: high cost and upfront capital requirements. Also, floating power plants concepts compete with more traditional units that run on liquid fuels, renewables and nuclear power, which may receive governmental support over LNG, the report said.
"The concept of a fully integrated floating re-gasification and power plant may be a more realistic solution to grant easy access to clean electricity production," the IGU said. "Such fast track projects, built and commissioned at reputed shipyards, may materialize in the near future..."

...The company converts existing dry bulk vessels, buys engines in bulk and builds them "one after another, almost like a production line," Harezi said.
The technology for the power plant is internal combustion engine, rather than more typical turbines. While more expensive to build, they are cheaper to maintain and better suited for countries in hot climates with unstable grids, which are often in desperate need for power to avoid blackouts...

To the people who created this, thank you. God knows as the 3rd World develops (China, India anyone) power is needed. And this will help Fill the gap as new/replacement power stations are brought online.
Posted by Mike Thiac at 7:22 AM

Email ThisBlogThis!Share to TwitterShare to FacebookShare to Pinterest
Labels: Technology